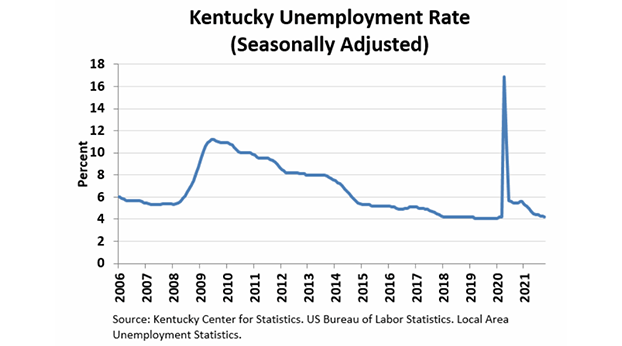 FRANKFORT, Ky. (KT) – Despite the so-called “Great Resignation,” Kentucky’s seasonally adjusted preliminary October 2021 unemployment rate dipped to 4.2%, according to the Kentucky Center for Statistics, part of the Education and Workforce Development Cabinet.

Kentucky remained below the U.S. seasonally adjusted jobless rate for October 2021, which was 4.6%, down from the 4.8% reported in September 2021, according to the U.S. Department of Labor.

“While Kentucky’s labor force contracted from March through June, it has shown signs of growth over the past four months,” said University of Kentucky’s Center for Business and Economic Research Director Mike Clark.  “Kentucky’s labor force grew during each of the last four months, adding 11,885 workers.  While these are not necessarily large increases and there is still a lot of volatility in the labor market, these increases may suggest workers are starting to slowly return to the labor force.”

In a separate federal survey of business establishments that excludes jobs in agriculture and people who are self-employed, Kentucky’s seasonally adjusted nonfarm employment rose by 3,100 jobs in October compared to the previous month, and up 1.5% compared to October 2020.

“Kentucky extended its jobs recovery in October,” Clark said. “Kentucky posted strong growth in its trade, transportation, and utilities sectors. However, these gains were offset by losses in arts, entertainment, and recreation businesses and other sectors.”

The Trade, Transportation, and Utilities sector was the biggest winner with 2,500 new hires, while the Leisure and Hospitality fell by 1,500.

Buckle up, put phone down urged for Thanksgiving travel