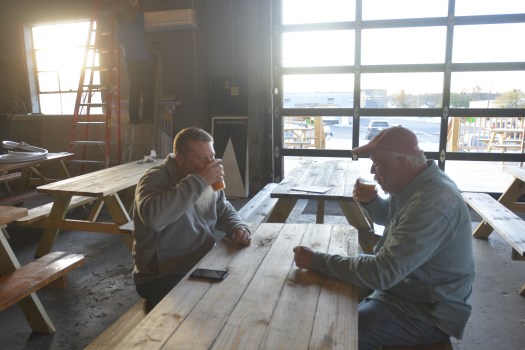 Dale Budke, seen in orange baseball cap, and a friend enjoy a cold one during the opening weekend of Abettor Brewing's Depot Street location. - Photo by Warren Taylor 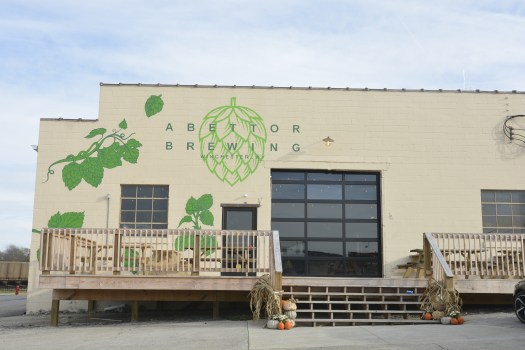 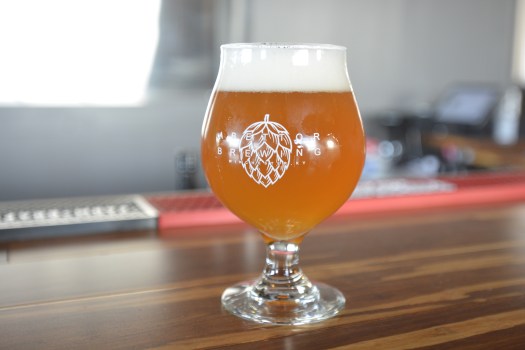 Abettor Brewing officially opened its Depot Street location this weekend in the most patron-pleasing way possible with trivia, food trucks and a Sunday brunch.

For its employees, though, the long-awaited unveiling heralded the time to take a deep breath.

“It’s a big stress relief,” said John Howard, Abettor’s taproom manager. “We’ve been pushing and pushing to get it off for a year … It’s nice to see it come to fruition.”

In a previous interview with the Sun, its founder, Tyler Montgomery, said he decided it was time to open a second location because he believes Winchester “can support more than one brewery” and to offer a better customer experience. He said he admired the Depot St. location, but it was continuously occupied until earlier this year.

Abettor started renting the building before eventually purchasing it outright. Before it could become the second location, the building needed extensive plumbing renovations to accommodate brew tanks and electrical upgrades for safety reasons.

It is still a work in progress.

“We have some things to take care of, but the space is usable,” Howard said.

The brewery’s customers were also ready for the new location to open.

“Winchester was begging for us to get going,” Howard said.

Unfortunately, they will have to wait a bit for any special commemorative beer to mark the second location’s opening, but Howard said customers should expect more of a local favorite.

“A lot of Winchester has come to like New England IPAs, so we are going to keep exploring and pumping out new ones of those,” he said.

“It’s really amazing how fast it has grown in the short amount of time it has been in Winchester,” she said.

Samples said that the crew “are all super ecstatic” about Depot Street and that she thinks it “will be more of a flagship” for the brewery in the years to come.

One customer was already impressed by it.

“It’s better,” Dale Budke said and compared it to Abettor’s other location. “It’s difficult to get in that one down there. I like it, but it is hard to get in and out.”

Budke and a group of friends from Mount Sterling “bop around” different microbreweries across central Kentucky and have come to love Abettor.

“We like this one because it is close and not a bunch of hassle. It’s kind of homey; normal folks, and it is not stuffy,” he said.

Adam Johnson and Jeanette Burke recently moved to Winchester from Huntington, West Virginia, and said that each visit made them feel like they were at home.

“Every time we came, we saw the same people, and they were super nice,” Johnson said. “They have a lot of regulars … What other factors could you want from a local watering hole type of deal?”

Burke said she enjoys the brewery’s products and atmosphere.

“The beer is great,” she said. “It has a nice very casual vibe.”