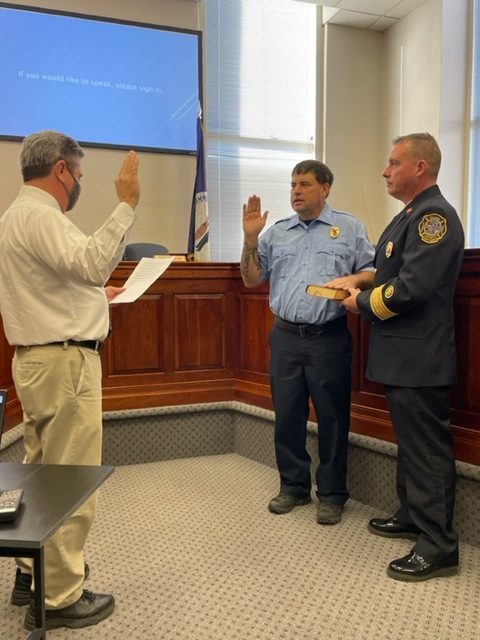 Flanked by county Fire Chief Steve Asbury, firefighter Kelly Smith (center) places his hand on the Bible as he is sworn-in as a captain recently by county Judge-Executive Henry Branham. (Photo by Miles Layton)

Clark County Fiscal Court will hold a special meeting at 6:30 p.m. Dec. 7 at the courthouse to consider pay increases for employees of the county’s fiscal court.

Potentially, all fiscal court employees, not just a few key staff members may see a bigger paycheck, but only if there’s money in the budget to pay higher wages, magistrates said.

When the court met Nov. 23, magistrates discussed a proposed salary increase for the county’s Assistant Treasurer/Director of Finance Amanda Spurling. That conversation opened “Pandora’s box” as to who else may need a raise.

Magistrate Daniel Konstantopoulos offered high praise for the outstanding job Spurling has been doing since she was hired nearly four months ago, but he said he is concerned how approving a pay raise in the middle of the budget year would “open Pandora’s box” to other employees who might deserve a pay increase too.

Konstantopoulos said it would be better to make these kinds of decisions when preparing the annual budget rather than doing it piecemeal throughout the year.

Judge-Executive Henry Branham added, “I don’t think increasing a base salary in the middle of a budget year is not sound financial judgment — I disagree with you on that Daniel.”

Konstantopoulos responded that it is hard to make a sound financial decision to increase pay for one individual when the court doesn’t know how that cost may affect the bottom line across the board when evaluating potential pay increases for other county employees. He said in order to make sound financial judgments, magistrates need more information.

Magistrate Tom Davis said though deserving, discussing pay raises for a few select employees may create the wrong perception with other county employees, particularly those workers who may never have received a significant raise but served longer. Davis said he is not receptive to the hodgpodge manner of discussing salary increases for a few employees when so many other workers have to wait.

“It’s never a bad look to give people a raise, but I think when you’ve got people who aren’t being considered yet (for a raise) and may not be considered for a few months, there is a sense of unfairness there,” he said. “I know you can’t do everything for everybody at once, but I think this can be taken up in a more organized fashion.”

Branham said by hiring and retaining these very capable department heads, the court is pursuing a policy to improve and expand county government. He said the proposed salary increases are acceptable and remail inline with the budget.

“You’ve recruited some great folks. They have great educations and skills… I think these things can be very well utilized in Clark County government,” he said. “When I bring these to you (salary increases) what I’m trying to do is to support the policy and the position that fiscal court seems to be going.”

Magistrate Greg Elkins said he disagrees with Branham’s analogy about how the court is expanding county government, but rather it has expanded the roles of key employees. Elkins said he could support proposed pay increases as long as they were inline with the county budget.
Elkins asked Branham if he anticipates a “stampede” of employees who would seek pay increases too.

“I know you had to have anticipated that when you did this,” Elkins said. “Do you anticipate being able to remain within the budget and give those additional increases that surely be coming.”

Branham said if department heads come seeking raises to aid with recruitment and retention, he will ask if the funds are in their budgets before proceeding with any further.

“What we will talk about is what are you budgeted? Are you going to be able to stay within your budget?” he said.

Magistrate Travis Thompson noted how county employees may get a raise because the court has $3.5 million available from the American Rescue Plan Act (ARPA) from 2021 with an additional $3.5 million of ARPA funds to be allocated in 2022.

According to a presentation from county Treasurer Alicia Mayabb, ARPA funds may be used:

• To provide premium pay (up to $13/per hour) to eligible workers performing essential work.

• Total pay can not exceed 150 percent of the higher than average annual state or county wage.

Elkins said the court needs to look at the whole picture before making any decision to offer raises.

“The price of groceries has gone up — we see it every time we go to the grocery store…I could see supporting the pay increases but I do agree with Magistrate Konstantopoulos as well. I’d like to see it done in a manner where we can see the whole picture rather than piecemeal,” he said.

Thompson said with the costs of everything increasing due to inflation, many employees can’t afford to wait much longer for the court to make a decision regarding any potential pay increases.

“It’s not their fault that when they go to the grocery store it costs them a little more this week,” he said.

In other business, magistrates approved a salary increase for Mayabb from $60,600 to $70,000 — the same salary as her predecessor; money that has been previously set aside to be allocated within the 2021-22 budget. In addition to Mayabb’s duties as treasurer, she will be managing the accounting of the ARPA funds.

On that note, Mayabb provided the court with a presentation about how ARPA funds may be spent. She said the permitted use of funds includes support for COVID-19 mitigation efforts, replace revenue loss, offer additional pay for essential workers, address negative economic impacts, improve accessibilty to broadband and make investments in water and sewer infrastructure.