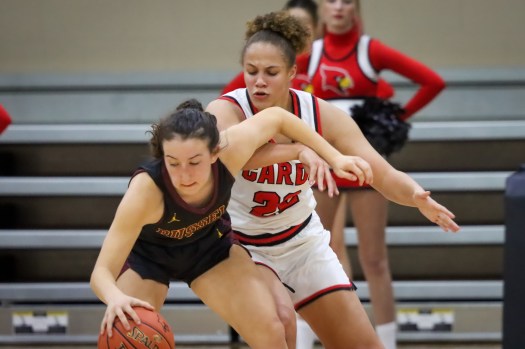 Senior forward Tyra Flowers terrorized Russell in the first half. Five of her six steals came in the opening frame. - Photo by Jon Paul Martin. 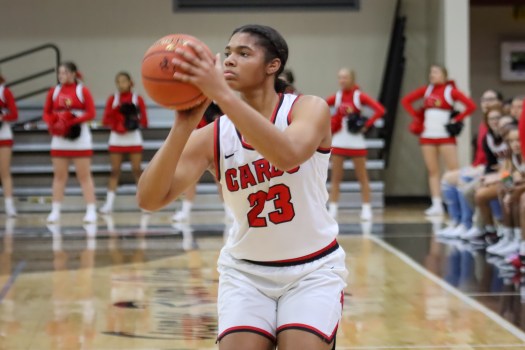 Junior Brianna Byars was one of three Lady Cards to score in double figures. - Photo by Jon Paul Martin.

The George Rogers Clark Lady Cardinals had the Russell Lady Red Devils on the run from the opening tip to the late-running clock in its 59-25 season-opening victory at GRC Arena.

Thanks to two quick Lady Red Devil turnovers, the Lady Cards (1-0) jumped out to a 6-0 lead early in the first quarter and were never threatened again as miscues would continue to haunt the visitors for the rest of the opening half.

GRC’s press forced Russell into eight more turnovers during the quarter, and as a result, the defending 16th Region champions could not establish any offensive flow and faced a 22-2 deficit after the opening eight minutes.

“We were really wanting to have a great start,” he said. “We got some baskets early, and we were able to get into our press … We really had a blazing first quarter.”

In the second quarter, Russell (0-1) continued to wilt under GRC’s high-pressure defense and finished the half with 19 turnovers.  They finished with 29 total for the game.

Senior forward Tyra Flowers was a first-half menace on defense and picked the Lady Red Devils’ pocket several times. Five of her six steals came in the half.

“Tyra plays the back end of our press because she is so long and athletic. She sees the floor really well and sees things develop really well, so she gets a lot of steals in our press,” Graham said.

Flowers was one of three Lady Cards to score in double figures. She collected all 11 of her points in the first half, was 7-of-8 at the foul line, and grabbed six rebounds.

“They rebounded well. That’s the one thing they both do really well,” Graham said about the sister’s performances. “They saw the floor well, and passed and moved the ball well.”

Coach Graham said he thinks there is room for improvement before the Lady Cards hit the road on Saturday to play the Scott Lady Eagles.

“We are still a work in progress,” he said. “There are always little things that we can improve on. There are turnovers we’ve got to clean up on and rebounding; we have to do a better job rebounding. Some of our rotations on our defenses have got to be a little quicker.”

GRC turned the ball over seven times in the first half but took better care of it in the second by only having three turnovers.