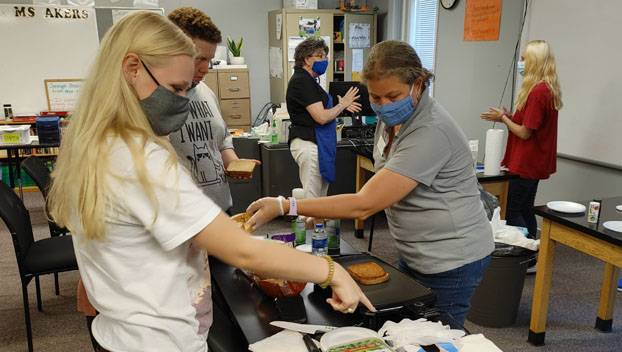 Phoenix Academy students were taught to cook on a budget by Shonda Johnston from the Clark County Extension Office. - Photo submitted by Greg Yates

Many years ago, during his time in the U.S. National Guard, Greg Yates was stopped outside a Richmond convenience store by a young lady who needed help with car trouble.

“She had the hood of her car up, the radiator cap open holding a quart of oil, and says ‘Excuse me, sir, is this where that goes?” he said.

The memory stuck with Yates, who is now the community education coordinator for Clark County Public Schools.

It became more prominent in his mind as changes in school curriculum cut off instruction in subjects like home economics and wood or auto shop, and more and more young people entered adulthood without basic “adulting” skills.

It is why he developed the Life Skills Academy for students at the Phoenix Academy.
The pilot program brought in several community members on Fridays during the fall semester to teach the students a skill they will need in the adult world.

“We did one [class] on basic automobile maintenance,” Yates said. “We did one on basic banking: how to set up a checking account and the difference between a credit card and a debit card … We had another person come in and teach nothing but credit scores and what impacts it and how those credit scores are determined later life.”

The students learned other aspects of financial literacy, such as how to purchase groceries and appropriate attire for a job interview on a budget, retirement planning, and filling out tax forms.

The academy also included lessons about the different types of insurance, first aid, and fire safety.
The crash course in the real world appropriately ended with the students learning how to rent their first apartment.

“They could think back on how other things like having a credit card or having a checking account or having a good credit score all sort of are fed into that culmination,” Yates said.

The inspiration for the academy came from an email he received from the Kentucky Department of Education that highlighted the work a school district near Lousiville was doing with the concept, Yates said.

He contacted the district and received permission to use the idea but decided to hold off pitching it to Clark County administrators due to the COVID-19 pandemic.

This spring, he decided the time was right and met with former Superintendent Paul Christy.

“He thought it was great,” Yates said. “He came up with the idea of coaching the Phoenix Academy … They are a smaller school. They started this year with 25 students, and I think they have like 50 now, but anyways it was a smaller body for me to work with; they were all for it.”

After the new year, the academy will take the students out of the classroom. Yates said he is organizing field trips to Bluegrass Community and Technical College, Bluegrass CDL Academy and a cosmetology school. He also plans to evaluate what worked and didn’t at the Phoenix Academy with hopes to eventually expand the Life Skills Academy to include groups of students such as the seniors at the high school.

Changes in the makeup of the American family may necessitate it. The school district has a high percentage of students who live with someone who is not a biological parent.

“They might not have the right role models,” Yates said about why he brought in members of the community to talk to the students. “I wanted them to see those different people come in from different walks of life … It sets a good example for these young kids to see someone who has been successful in life.”