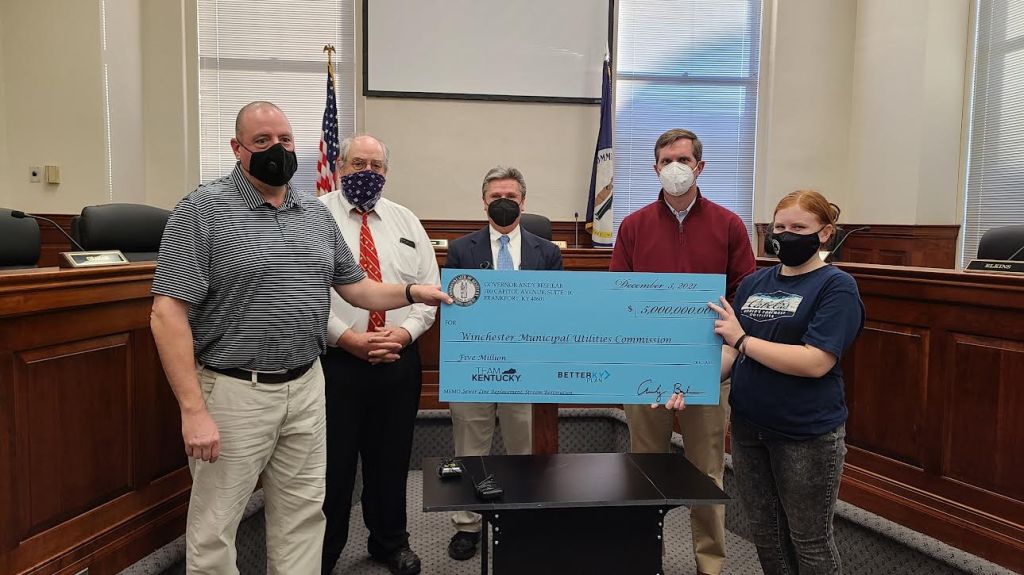 Kenneth Dryden, Mayor Ed Burtner and Judge-Executive Henry Branham were presented with a check that will go toward water quality improvement projects by Gov. Andy Beshear and Hadley Farmer. - Photo by Warren Taylor

Winchester got a visit from Gov. Andy Beshear Friday, and good news came with him.

The governor presented three checks totaling $5.9 million for projects at the Clark County Courthouse, which will fund projects tied to water quality improvements in the area.

“Clean drinking water is a basic human right,” Beshear said. “Every family deserves it, and every child deserves it. I’ll tell you far too many people in the year 2021 don’t have it or don’t have reliable water and sewer.”

The funding for the projects comes from the Better Kentucky Plan’s $250 million Cleaner Water Program.

The program is the result of a bipartisan bill passed by the General Assembly earlier this year to use monies from the American Rescue Plan to provide grants for clean drinking and wastewater projects across the commonwealth.

Some of the projects are providing the first-ever direct water service for some Kentucky residents.

“As we’ve traveled this commonwealth, getting to provide these grants, we’ve had dozens of families that are going to have water run to their house for the very first time,” Beshear said.

Local leaders were grateful for the county and city to receive the grant money.

“I am pleased by the announcement of this project. Access to clean and reliable water is essential to the health and well-being of our communities, and that includes economic health,” he said in the statement.

Winchester Municipal Utilities received the bulk of the money, $5 million total. It will fund the final project that will settle the consent decree signed in 2007 between the city and the U.S. Environmental Protection Agency regarding overflow along Strodes Creek.

“What happened is that we had 27 manholes, we would get a lot of rain, they would overflow,” said WMU General Manager Kenneth Dryden.

Through various projects, WMU has cut down the number of overflows in the area to two, and this project will cut that number to zero.

“It’s a huge project,” Dryden said about the upcoming work.

WMU will replace the sewer lines running from the wastewater plant on Van Meter Rd. to the area near Broadway and Johnson streets.

Dryden said that the project is “about 90 percent” through the design phase.

The project will also include stream restoration along Strodes Creek.

Branham said that one of the checks, totaling $600,000, will go toward designing a system of water trunk lines that would go throughout western parts of the county. The other check, totaling $310,00, will go toward badly needed water line repairs in the East Clark District.