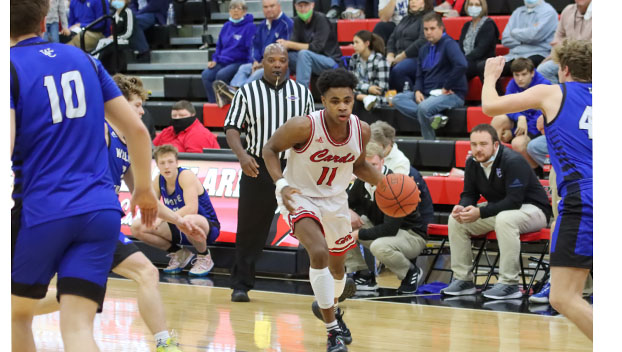 Jerone Morton drives through the heart of the Wolfe County defense. Morton paced the Cards with 23 points after an off night in the season opener at Campbell County. - Photo by Jon Paul Martin

By Matt Cizek/Contributor
This week, the Cardinals of George Rogers Clark High School opened their season in successful fashion.
On Thursday night – in a competitive season opener – they were able to top Campbell County 76-65.

They shot nearly 50% from the field, with Trent Edwards and Tanner Walton tying for the team lead with
19 points on 60% field shooting. Jerone Morton led the team with 11 rebounds.

Two days later, the Cardinals opened up with a 10-0 run en route to an 83-36 blowout over the Wolfe
County Wolves. Ten different players ended up scoring, including Jerone Morton with a team-leading 23
points. Several slam dunks were featured, with impressive defense contributed by Trent Edwards and
Stanley Smothers.

The Cardinals look forward to games this week against Madison Central on Tuesday night, and at home
against Pendleton County and Harrison County.