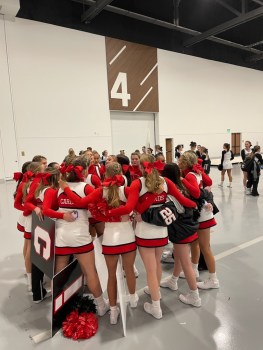 George Rogers Clark High School cheerleaders have qualified to compete in the All-Girls Medium Two Minute Drill Division at the KHSAA Competitive Cheer Championship that will be held Friday and Saturday at GRC. (Submitted photo) 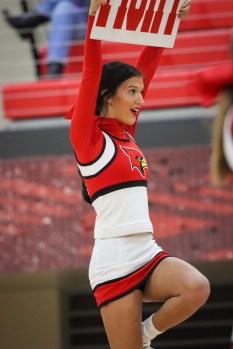 GRC senior cheerleader Mallory Weistroffer said the competition presents individual challenges.“My most challenging thing is the stress that competing brings because you get out there, and you have so much adrenaline and so much anxiety. It’s like you have to pull everything off within those two and a half minutes." (Photo by Jon Paul Martin)

The spirit of the 2020 KHSAA Competitive Cheer Championship was enough to inspire Mackenzie Kegly to join the squad for her last year of high school.

“I loved the atmosphere, and it made me happy,” she said.

George Rogers Clark hosted the state finals last year, but Kegly did not get to watch her future squadmates compete because they did not qualify.
The school hosts the state finals again this Friday and Saturday, and the GRC cheerleaders have qualified to compete in the All-Girls Medium Two Minute Drill Division.

The squad is excited to compete on their home floor.

“It is kind of like we have that home team advantage,” said senior Hallee Cecil. “It is really cool that all of our friends and family can come and see us because our last competition was in Pulaski County and that was kind of far away. Being close to home is a lot more fun, and it eases our nerves a lot.”

Cecil described the squad’s division as over two minutes of “tumbling and stunting”.
The environment is nothing like a basketball or football game.

“You are out with your team,” she said. “This environment is so different, and you are up against ten teams at a time instead of one.”

“My most challenging thing is the stress that competing brings because you get out there, and you have so much adrenaline and so much anxiety. It’s like you have to pull everything off within those two and a half minutes,” she said.

Getting back to the state finals is exciting for fellow senior Kaitlyn Bailey, and qualifying is one of her favorite memories from her four-year cheer career.

“We haven’t been to state in two years, so being able to sit down with my team, getting called, and getting that excitement of being able to go back was really exciting,” Bailey said.

The four seniors all agreed that their goal is to win but that they would be happy to finish in the top five too.

Assistant coach Emily Marquez was on the last GRC cheer squad to win a state title in 2014.

“A lot of them have been together for a very long time, so they know how to bond and work together for a common thing,” she said about what makes this group so unique.

A win at state would be a return to the “old ways”.

“It’s a different mentality about wanting to win,” Marquez explained. “These girls are super talented, and I think they are underestimated in cheerleading. I think they are trying to prove to people that cheerleading is is hard and that they deserve to be respected just as much as the other teams.”