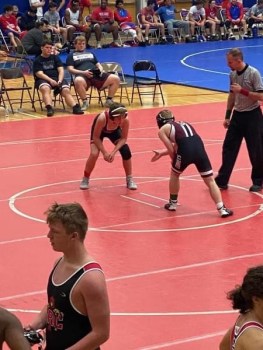 Cards’ wrestling team defeated West Carter during at a recent tournament featuring top programs from across the state. Cards are on the rise, so seeing these two wrestlers about to dual brings to mind that song “Lunatic Fringe” from the 80s movie Vision Quest which featured wrestling. Maybe pop this into the search engine: https://www.youtube.com/watch?v=6XdFExsqoC4 (Submitted photo)

George Rogers Clark High School’s wrestling embraced the challenge, left the mat with glory after a recent big match against four top programs vying for victory at Madison Central.
GRC’s newly minted team defeated West Carter 48-30; but fell to Davies County 51-24; Madison Central 78-0; McCreary Central 54-30; Green County 48-36.
Final score doesn’t tell the whole story about this scappy team that went into the ring without fear Dec. 4.
“I was very pleased with our performance at our first ever tournament as a team — and grabbing a win made it much sweeter,” Cards’ Coach Ethan Miller said.
Team just started a few short months ago and is already knocking out opponents in every weight class.
Cards will host a Big Brother dual Dec. 28-29 that will feature 12 middle school and 12 high school teams from across the state. For more information about how to join the team, reach out to Miller at ethanmiller133@gmail.com and/or 859-229-9131.