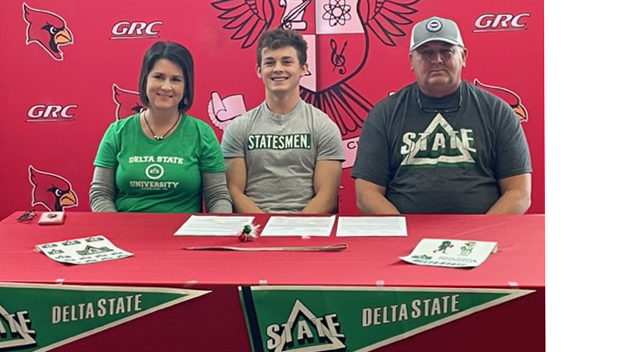 Always supportive, Aden Slone's proud parents Jody and Irton share a moment that their son has ben working toward since he started scoring buckets in front of large crowds. Slone said he chose Delta State in Mississippi because he'll be able to play as a freshman. (Photo by Miles Layton)

Cards’ talented point guard Aden Slone has signed onto play for Delta State University next season as a freshman.

Slone signed the line for a scholarship to play basketball for the Statesmen on Wednesday in front of teammates, coaches, friends and family at the GRC library.

“During his two years at GRC, there’s been a lot of success; he’s the definition of a true point guard,” Cards’ Coach Joshua Cook said. “He’s a team-first guy, very unselfish. He makes the teammates better.”

Though the Cards’ season has just started, Slone has scored an average of 8 points per game, 4.6 rebounds per game, 2.5 steals per game so far during his senior season, according to KHSAA and the sports website KHSAA. “I’m going to play for Delta State — I’m going to get buckets there because that’s what I do,” Slone said.

Slone’s mother Jody said her son has always been a confident kid, very witty and quick on his feet.

“Aden is very determined,” she said about her son, who has a straight ‘A’ 4.0 grade point average. “If he has something that he wants, he really works towards it. Just like with basketball, he has always had this personal conflict because of his height at 5’9” — that really bothered him. People would say ‘oh, he’s pretty good, but you know his height; if he could only grow.’ But he used that to push himself to be the best that he could be with what he has — a lot of people won’t do that. I’m very proud of him for doing that.”

Cards head coach Josh Cook recalled a conversation about Slone that he had with Delta State, NCAA Division II school located in Cleveland Mississippi and a member of the Gulf South Conference.

“Delta State Coach called and said, ‘Look, is he as good as he thinks he is?’ I said absolutely. He’s a pure point guard,” he said. “He plays with ‘high IQ’ — he sees the play before it happens. That’s his special gift.”
recalled how he was elite basketball player from sixth to eighth grade for a team that went 110 and 20 over three years. While at Danville High School,

Slone led a team to the regional finals with a 28-6 record and he was considered the best point guard in the region. Slone transferred to GRC for his junior team to play as starting point guard for a team that was one of the best in the state.

“He works relentlessly on his game and he has a tremendous point guard skillset,” said Bill Canter, who coached Slone during his Amateur Athletic Union days. “Aden is a real entertainer, a showman and does things in the flow of the game that are very creative yet not excessive. He knows how to play a pure point guard position while showing off a little bit, but not taking over and showboating. He is an ‘A’ student, a very bright kid and has many friends all over the state who are involved in basketball. The reason he chose Delta State is that there system is tailor made toward his style of play in terms of his remarkable point guard skills — basketball IQ.”