Time to shine: Winchester Post Office is putting in extra work to make sure gifts get in on time 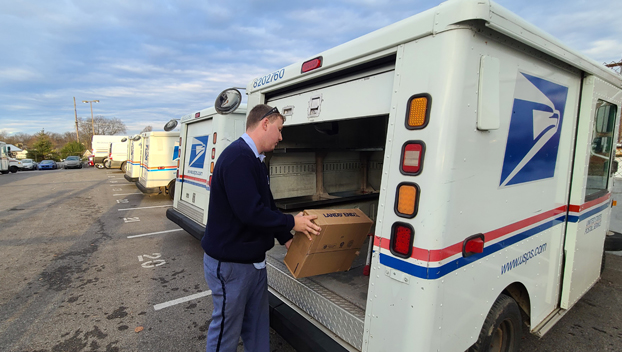 A USPS employee loads a truck during one of the early morning delivery runs. (Photo by Warren Taylor)

As Winchester and Clark County residents prepare to be home for the holidays, the Winchester Post Office is working around the clock to make sure their gifts do the same.

“Obviously we see an increased package volume, which is what we are here for, we are here to deliver for the people of Winchester and Clark County,” Postmaster Nathan Gabbard said.

There is not a large increase in normal mail such as letters, newspapers or magazines. The increase comes in the number of parcels the United States Postal Service delivers.

The rise of online retailers such as Amazon in the past two decades has fueled the surge in the number of gifts being mailed.

“We make early parcel runs. Our guys are out doing that right now and will be coming back here shortly. Just to get that stuff to our customers as early as possible,” Gabbard said.

One letter carrier sees the entire year as preparation for the madness of the holiday season.

“We’ve kind of got a saying around here that we work all year to prepare for this one month,” Nathan Patterson said and added, “It’s a lot of early mornings and late evenings.”

The work also allows for the USPS to show off and show their customers that they care.

“It’s basically our time to shine,” Patterson said about the holiday season. “You get to know your customers pretty well and they are almost like an extension of your family. There are a lot of good people here and I try to treat everybody’s stuff like it is my own.”

Patterson is a USPS veteran and said that carriers take every precaution to make sure packages are not in plain sight for thieves.

“We usually try our best–if we can–to hide a package. We’ll hide it under a matt or under a chair. There has been several instances where I’ve been taking packages in the morning and you might see a suspicious vehicle following you or something, and in that case, I won’t deliver the package until later in the day,” Patterson said.

Postal clerk James Anderson had a simple tip for folks to ensure their package does arrive by Christmas.
“It’s better to get it there a littler earlier than the last minute,” he said.

Gabbard added it is always a good idea to add package insurance and tracking.

One issue hanging over the holidays is supply chain issues causing package delays.

So far, using package volume, Gabbard says that the numbers from last year and this year are almost similar.

Another recurring 2021 theme, staffing shortages, has not hit the Winchester Post Office during their busiest time of year.

“We are fortunate. We are pretty well staffed right now. We’ve got enough carriers in the building, and clerks, that we do not have any issue pushing the volume out,” Gabbard said.