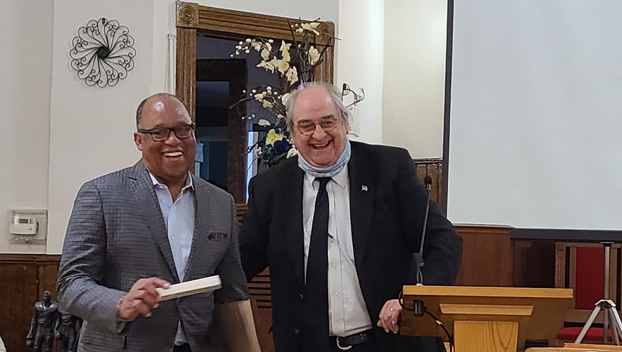 Winchester Mayor Ed Burtner presented a score of honors to Wilbur Hacket on Saturday, including the key to the city. (Photo by Warren Taylor)

Wilbur Hackett left a tremendous legacy as one of the first Black football players to break the color barrier in the Southeastern Conference and as the first team captain of color during his football career at the University of Kentucky.

On Saturday he returned to Winchester, his hometown, to speak at Broadway Missionary Baptist Church as part of an event organized by the Winchester Black History & Heritage Committee.

“I had a great childhood, six years, and I can confidently say that who I am and whatever I was able to accomplish in my life started right here in Winchester, Kentucky,” Hackett said to a packed sanctuary as he spoke about the subject leaving a legacy.

Hackett defined a legacy as “something that is inherited or received from a predecessor” and can be something such as skills, lifestyle or intelligence.
He credited the strong influence of family and friends with laying the foundation for his legacy during the six years he lived in Winchester from 1949-55, especially his father, Wilbur Hackett Sr., and uncles James and Thomas Hackett.

Hackett fondly a childhood of homemade treats that cost just a penny, having a 1st-grade class so large that it had to attend some instruction time in a locker room and baseball at Harmon Field in Bucktown.

“As I remember and revisit my past, it occurred to me that if I were to have kept my history in my own written words it might reveal a completely different Winchester than we see today,” he said.

By the time he became a Parade All-American linebacker at Lousiville’s DuPont Manual High School in the late 1960s, Hackett had his choice of places to attend college on an athletic scholarship. He wanted to attend Michigan State University. His father had other ideas.

“My dad, I didn’t know, was a big UK fan and so were a lot of people in Winchester at that time even though you couldn’t go to the games, they still cheered for UK,” Hackett said.

The elder Wilbur Hackett often said in the 1950s, during the height of segregation, that he would someday attend a Wildcats game. So when his son had a chance to play there, no other school would do.

Even in his later years, Hackett said he struggled to understand how his parents could support a segregated team and eventually asked his mother why.

“You know what she said, ‘I don’t see color’, he said. “And we shouldn’t see color. We should judge a person by who they are; the content of their character not the color of their skin.”

Hackett and his fellow Black teammates endured hard times when they went on the road to play but over 50 years later he said that it was a “priviliege” to play in the blue and white.

At the end of the program, Hackett was awarded the key to the city by Mayor Ed Burtner and given a proclamation designating him as a Kentucky Colonel.