U.S. Rep. Barr writes about bill, named for his late wife, to spur research into the heart ailment that killed her in June 2020 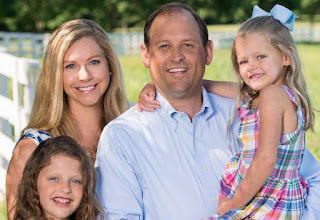 The late Carol Barr with her husband and daughters Eleanor and Mary Clay. (Submitted photo)

By Andy Barr     Though every holiday season without my wife Carol will be difficult, this year I am comforted by the fact that her legacy will be enshrined through the Cardiovascular Advances in Research and Opportunities Legacy (CAROL) Act, which passed the U.S. House of Representatives on Wednesday.

On June 16, 2020, my and my two daughter’s lives changed forever when my wife and best friend Carol unexpectedly passed away at 39 years old from sudden cardiac arrest. The medical examiner and Carol’s doctors told us that her fatal heart attack was likely brought on by a ventricular arrhythmia.

At a young age, Carol had been diagnosed with an underlying condition called mitral valve prolapse (MVP), or floppy valve syndrome—a typically benign condition that results in sudden cardiac death in only .2% of cases.

What factors placed Carol in the 0.2% versus the 99.8% category? In my discussions with top cardiologists, medical experts, researchers, and advocates following Carol’s passing, I learned the extent to which the medical community seriously lacked answers to this critical question. So, I decided to take action and introduce the CAROL Act, to better equip our medical community with the resources needed to develop predictive models, inform communities, and possibly save the lives of other loved ones.

Specifically, the CAROL Act authorizes a grant program administered by the National Heart, Lung, and Blood Institute, to support research on valvular heart disease, including MVP.

This legislation martials the full power of 21st-century medical innovation and encourages the utilization of technological imaging and precision medicine to generate data on individuals with valvular heart disease.

It is through this research that we can help identify Americans at high risk of sudden cardiac death from valvular heart disease and develop prediction models for high-risk patients, enabling interventions and treatment plans to keep these patients healthy throughout their lives.

Additionally, the CAROL Act will instruct the Centers for Disease Control and Prevention to increase public awareness regarding symptoms of valvular heart disease and effective strategies for preventing sudden cardiac death.

This week, the CAROL Act, which has earned 179 bipartisan cosponsors, passed the U.S. House of Representatives. My friend and fellow Kentuckian, Sen. Mitch McConnell and Arizona Sen, Kyrsten Sinema, whose sister also passed away from valvular heart disease, are leading the companion bill to the CAROL Act in the Senate.

We are rapidly approaching the finish line of this legislation becoming law. No matter what, Carol Barr’s greatest legacy will always be our two beautiful daughters, Eleanor and Mary Clay. Now, through the CAROL Act, her legacy also offers an element of hope that countless families will not have to experience the tragedy that has so profoundly impacted ours.

Andy Barr is a Republican representing the Sixth Congressional District.