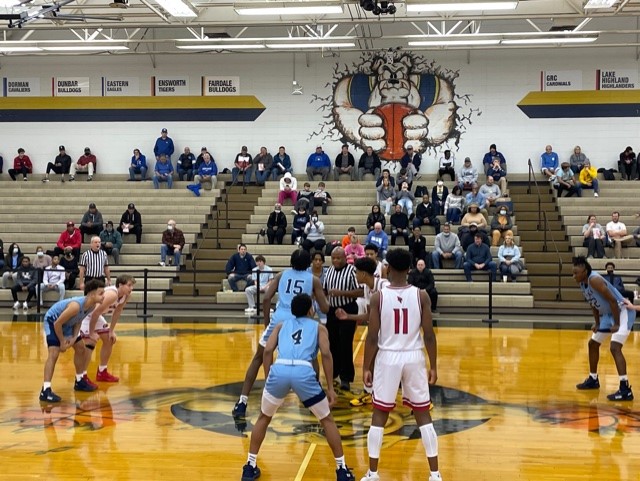 Despite an impressive showing on both ends of the court against the top-ranked team in South Carolina, George Rogers Clark Cardinals boys’ basketball team suffered its first loss of the season by a narrow score of 59-57 to Dorman Cavaliers on Sunday at the King of the Bluegrass Tournament in Louisville.

By Matt Cizek/Contributor        With Naismith Memorial Basketball Hall of Fame Inductee and former Denver Nuggets Head Coach Dan Issel among others in attendance, a battle of undefeated teams took place Sunday night when the George Rogers Clark Cardinals boys’ basketball team came out decked in red to take on the undefeated Dorman Cavaliers at the King of the Bluegrass Tournament in Louisville.

Despite an impressive showing on both ends of the court against the top-ranked team in South Carolina, the Cards suffered their first loss of the season by a narrow score of 59-57.

“Obviously, they’re really good. They’ve got so much length, so they make it difficult so far as trying to get easy shots,” Cards’ Coach Josh Cook said. “Our guys showed some toughness. They had opportunities to be in the game, a chance to win the game, and that’s all you can ask for.”

Early on, the Cardinals were able to build a slim first-quarter lead in a low-scoring first half on a pair of three-point shots by Tanner Walton and Trent Edwards. Later, Reshaun Hampton added 3 more points on a swish from behind the arch. This made up 12 of the team’s 16 first half points, as a strong defense helped keep them in the game with a 22-16 halftime deficit.

During the second half, the Cards – who averaged nearly 81 points per game coming into the contest – turned up the volume offensively.
Trent Edwards scored 11 of his 14 points in the third quarter alone, and Jerone Morton would finish strong with 12 of his 20 points in the final period of play.

“The second half was completely better us. I think it was much more of a mindset than anything,” Cook said. “We started going north which allowed us to be the more aggressive team and opened [us] up for some easy buckets.”

Throughout the game, the Cards’ biggest challenge defensively continued to be Dorman forward Jordyn Surratt, a recent commit to USC Upstate who finished with 23 points.

“They’re physical, and very athletic. They did a good job of making it difficult for us” Cook said.

With just 2:32 remaining in the game, it looked all but over as the Cardinals were down by 11 to the Cavaliers, last year’s 5A runner up and state champions from 2016-2020 in South Carolina.

However, helped out by a trio of three-point shots by Aden Slone, the Cardinals were still in a position to tie or potentially win the game in the end. Unfortunately, a desperation heave from half court by Slone fell just short of the net, to a notable sigh of aww from the George Rogers Clark fan section.

“Some of our guys started making some plays [on offense], and we needed to do that,” Cook said. “Overall, I’m pleased…with our guys.”
Sunday’s game came just one day after defeating Lake Highland Prep of Orlando, a highly ranked and also previously undefeated team from the state of Florida.

In conjunction with other games taking place during the King of the Bluegrass Tournament, it could prepare the Cardinals for what lies ahead.

“We just hope these situations pay off” Cook said. “To go against that type of talent, that type of disciplined team…hopefully you learn a lot from it and put your guys in situation where, come March, they’re prepared and ready to execute.”