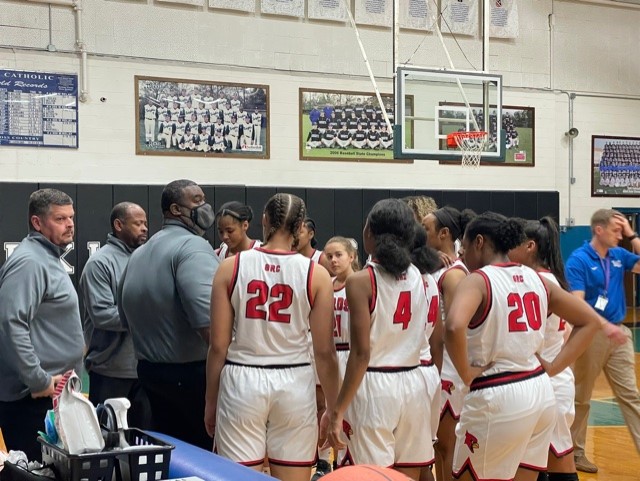 During a time out session, Cardinals' coaches talk strategy about the offensive and defensive tactics needed to score more points than Boyd County's Lady Lions in the opening round contest of the Traditional Bank Holiday Classic on Saturday. (Photo by Matt Cizek)

By Matt Cizek/Contributor           With both defenses playing a highly aggressive full-court press in an opening round contest of the Traditional Bank Holiday Classic Saturday evening, the intensity between the George Rogers Lady Cardinals and the Boyd County Lady Lions could be felt from the sideline.

Yet, despite an early deficit in a game that seemed destined for close competition, the Lady Cardinals were able to break out en route to a dominant 69-34 victory.

“That’s what we do. We’re going to press people [on defense] and we’ll try to wear them down,” GRC Head Coach Robbie Graham said. “We want to create some turnovers and score off of our defense.”

The plan seemed to work to near perfection.

Early on, the Lady Cardinals and Lady Lions both asserted that the game would be physical, with a pair of fouls taking place in the first minute alone.

Yet after the Lady Lions’ Isabella Opell provided them with a 10-9 lead following a 3-point shot, the momentum seemed to turn in the Cards’ favor.

Outscoring Boyd County 8-0 to end the quarter, the Lady Cardinals ended the half on a 29-5 run to build an insurmountable 38-15 halftime lead.
In total, the Lady Cards forced 25 turnovers. “It was all about defense. We were able to get our hands on balls, and get some easy baskets,” Graham said. “[We] got a few more skills, got a few more easy baskets. We scored, but we scored off of our
defense for sure.”

Offensively, the team was led once again by the Byars sisters. While Ciara Byars contributed 13 points, Brianna Byars was the lead scorer with 16 points. This came while seated for much of the third quarter, as she was also the only Lady Cardinal to score in both the first and second quarter.

“I just try to lead through example,” Byars said. “I just know that if I’m playing hard with [my
teammates], they’ll play just as hard as I am.”

“In practice we work on defense and intensity,” Byars stated. “Defense wins championships. We’re just working on that to keep it going and help us have a successful season in the end.”

Having started the 2021-2022 campaign with a 5-1 record, there’s much reason for excitement in Winchester. However, having taken several teams to Regional Champions, Coach Graham also knows there are always elements of the game that can be improved upon.

“We’ve got to continue to rotate better and get quicker,” Graham said. “Overall, we’ll definitely take the win and never apologize for the win. We’re really, really happy for it.”