WHERE IN THE WORLD? Gone But Not Forgotten: McEldowney House 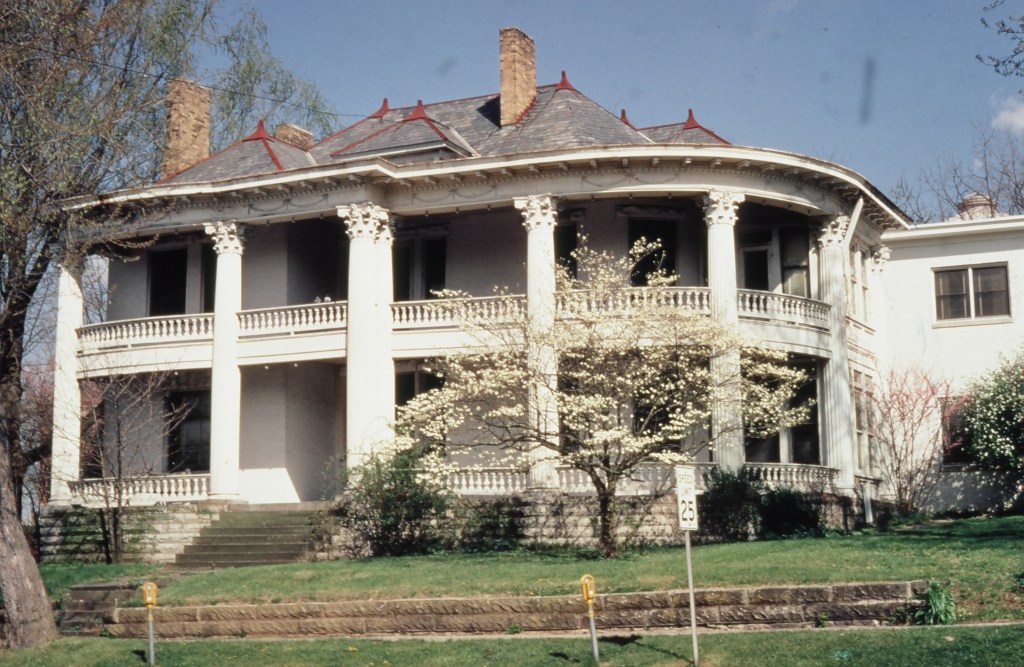 Gone but not forgotten, the McEldowney House, 215 S. Main St., was an amazing architectural gem in its heyday. The man who built the mansion, M.T. McEldowney, was a prominent local businessman who "was always at the front in every call for public service, his time and his money were given freely to church and civic enterprises.” (Robert Collins collection/Bluegrass Heritage Museum)

By Harry Enoch/Contributor        The sad news came on August 31, 2011, when the Winchester Sun reported: “Mansion falls into history.” The article informed local residents that the historic McEldowney House at 215 South Main Street, a long-time showplace of the community, was gone.

In 1898, M. T. McEldowney purchased a house and lot on the east side of Main Street adjacent to the home of Dr. John W. Ishmael (later the Guerrant Clinic and now the Bluegrass Heritage Museum). McEldowney had the old house torn down and put up his mansion on the lot. Newspapers reported that the house was occupied by the summer of 1899: “M. T. McEldowney and wife of Winchester have moved into their new residence. It is among the most complete and attractive in town, being made of yellow pressed brick, with modern improvements.”

Morgan Thomas McEldowney (1866-1934) was born on a farm near Vanceburg in Lewis County, Kentucky. He came to Winchester as a young man (1883) and went to work for S. P. Kerr at the Winchester Roller Mills. McEldowney married Nancy Cassidy, a daughter of Judge M. M. Cassidy of Mt. Sterling. McEldowney advanced rapidly in Winchester, at first under Kerr’s tutelage and then on his own hook.

When Kerr died in 1906, McEldowney purchased Winchester Roller Mills with partners William Woolcott and David T. Matlack. He sold his interest to Woolcott and Matlack in 1921.

McEldowney began buying and selling real estate, which must have been profitable. In 1907 he built a handsome four-story office building on Cleveland Street that housed the post office, fraternal organizations, law offices and others. When the building burned the following year, he immediately went to work to replace it with a six- story fire-proof building. Constructed of brick and concrete, it used no wood except for doors and windows and had the town’s first passenger elevator. The McEldowney Building has undergone a major renovation by the current owners, DAM Holdings.

In 1916 McEldowney purchased a failed institution, the Commercial Bank and Trust in Louisville. He agreed to pay off the bank’s $74,000 of liabilities within seven years. When that was accomplished, in 1923 he started a new bank in Winchester: The Commercial Deposit Bank opened in a new building he had erected at the southwest corner of Main and Broadway. He served as its president until his death.

McEldowney suffered a heart attack in December 1933. While recovering at home, he had another, fatal, attack on February 20. His obituary stated that “he was always at the front in every call for public service, his time and his money were given
freely to church and civic enterprises.”

The McEldowney House had only three owners. The second was Allen M. Buckner Jr. (1935), the nephew of Nancy McEldowney. (Buckner would also acquire the McEldowney Building and Commercial Deposit Bank.) The last owner was the Guerrant Mission Clinic and Hospital (1943). The hospital closed in 1971 and the clinic in 1989.

By the time I moved to Winchester, the house had stood empty for many years; the yellow brick had long been painted white. With its two-story front porch and eight massive Corinthian columns, it was a local landmark.

The elements are not kind to unoccupied houses. Thus, over the years the house began to fall into disrepair. Several feasibility studies looked at restoring and preserving the structure. The first estimated the cost at just under a million dollars. After a few more years of deterioration, a second study put the price at 1.2-1.5 million dollars. One of the most seriously damaged elements was the striking front porch.

A summary of findings included several statements that dampened enthusiasm for restoration:

“It is not an architectural masterwork, although even in its dilapidated condition, it resonates boldly in terms of its design and
longstanding presence at this prominent location. One simple way to summarize would be to say that the building was constructed for massive proportion and good looks—which it achieved—but at the same time the construction materials and methods themselves were not capable of enduring for long, long periods—which is currently evident.”

The report concluded that “the McEldowney House is an overall poor candidate for full restoration and rehabilitation.”