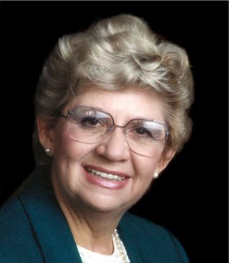 Berryman served as publisher between 1988 and 2006. She also was the first female president of the Kentucky Press Association.

Berryman’s storied career at the Sun began in 1954 when she was hired as assistant to publisher James Tatman. During her 52-year tenure at the newspaper, Berryman climbed the ranks to become general manager in 1974 and then hired as publisher in 1988.

“Newspapering is exciting business,” Berryman said in an interview published by the Sun in 2018 to commemorate 140 years of being in business. “No two days are alike ever. There’s something new everyday. There’s no doubt about it. But I enjoyed what I did. I enjoyed what I did and the people I worked with.”

Longtime KPA executive director David Thompson called her “one of the giants” of the press association.

“Betty was the kind of individual who commanded respect from newspaper folk, publishers, owners, editors — all granted her the respect she deserved. Everyone thought so much of Betty,” said Thompson, executive director of the KPA since 1983; hired by a committee which Berryman served.

Sun publisher Kevin Smith added, “Today, we mourn the death of a local leader in journalism and a pioneer for women at a time when men dominated the workplace. Her contributions will not be forgotten.”

“Betty was a solid rock in attempting to get everyone, especially public officials, to work in the moment and think in the future,” he said. “Betty and Bill Blakeman (longtime Sun editor) formed a solid partnership in reminding us all that the public interest always came first. Their columns formed a to-do list for a multitude of projects that came to fruition — a perfect example being the Bluegrass Heritage Museum. She was a stalwart example for young women wanting to make a difference in business and public affairs. She clearly left her mark.”

Berryman served on numerous national, state and local boards and organizations. After retiring from the Sun in 2006, Berryman went on to establish Partners in Education, a mentorship program that partnered local businesses with schools.

“Betty Berryman has made a lasting and permanent positive mark on this community,” he said.

Reflecting on Berryman, Branham said the first time he became aware of her and the many contributions she made to the community of Winchester/Clark County was in the early 1980s.

“We had just opened our small business, appliance & electronics sales & service. Our business was located at #1 S. Main Street,” he said. “We of course knew Betty as the publisher of the local newspaper, but as the months and years went by, we crossed paths in the Chamber of Commerce, Downtown Business Association, Clark County Public Schools and Planning & Zoning Commission, just to name a few.”

Branham said Berryman was a strong supporter of local business.

“She was always willing to assist local businesses in promoting themselves by offering various affordable options in the newspaper,” he said. “This relationship continued as our business grew and we moved from downtown to the Bypass.”

When Branham served as a county magistrate between 1994-1999, he interacted with Berryman on the Planning and Zoning Commission.

“She was very much in support of proper planning for our community so our citizens could experience smart growth and enjoy many public support services offered by our local governments,” he said.

Branham said after he closed his business in 2004, he was hired as Clark County Treasurer and served under Judge/Executive John Myers. In those days, Branham said, the county government was experiencing a severe cash flow issue and was struggling.

“Judge Myers enlisted the help of community leaders to work with me to form a recovery plan and once again Betty was called upon to serve her community, and she served,” he said. “During this period, I worked very closely with her because her office was just across the street, and she also had a very extensive knowledge of finance and business operations. A plan was formed, Clark County government recovered and now enjoys a healthy cash flow.”

“Sorry to hear about the passing of Betty Berryman,” he said. “She was a wonderful lady with her active involvement in the community and her lengthy work years at the Winchester Sun. She along with Bill Blakeman and Betty Ratliff made a tremendous team at the Sun. Betty left all of us; those that knew her and had worked with her have great memories for her love of our community and the outstanding job she did running the Winchester Sun.”

Current and former employees offered their tributes to Berryman.

Terah Hatton described Berryman as a role model who was “a classy lady.”

“I was very privileged to work for Betty. I was employed on her birthday in 2001. She always told me that working for a newspaper was wearing many hats, and I have learned that over the years,” said Hatton who works as the Sun’s circulation manager, customer service representative and she steers commercial printing jobs among other duties at the newspaper. “She was committed to the newspaper and knew how important it is for our community. She always strove for excellence and she was a great leader. I always strive to be like her and keep the newspaper prominent in our community because without the community, we are just people.”

“Betty Berryman was one of the best publishers I have ever worked for,” said Taylor who worked for the Sun between 2001 and 2015 as design editor and as sports editor. “Her door was always open and she treated her employees with respect. I will never forget her giving me a bonus for going the extra mile when we were short handed for a couple of months. I was not used to that at the time. She made me feel at home and her leadership put the Winchester Sun on the map. I’m thankful and blessed to have worked under her leadership. She was a valuable part of the community and will be missed.”

Sun photographer James Mann, now retired after 37 years of photographing news events and people of Clark County, recalled how Berryman transformed the newspaper from manual production to being computerized in layout and design. Mann said when he was hired in 1976, photography was very different with pictures being developed in a dark room. Later, Berryman upgraded to digital photography.

“Betty was such a sweet person and very good for the paper,” he said. “She was a progressive thinker who moved the paper forward in many ways.”

“You could always speak to her and as an employee, that’s nice to have,” Mann said.

Mann recalled the kind of person Berryman was by sharing a story about her.

“When I was having emergency surgery, she sat with my wife (Charlene) — that’s the kind of person she was,” he said. “Small towns are like that; people caring for other people.”

Paul Williams served as the Sun’s head pressman for many years.

“I met Betty in late 1964 when she was assistant to the publisher — his right hand person,” he recalled. “We were not only a newspaper, but we printed grocery fliers, weekly newspapers and all kinds of stuff. Betty — we got to know each other’s family well. Many times, Betty and the employees ate together, all as a group. When I had a stroke in 2001, Betty and her husband Bob were my first visitors.  Me and Betty saw pretty much eye to eye. She advanced the newspaper in many ways. She was a blessing to the newspaper during her tenure there.”

Sharon Tuminsi worked alongside Berryman for many years.

“It was my pleasure to work with Betty for 31 years at The Winchester Sun. She hired me as the advertising bookkeeper in 1972,” she said. “During my time there she gave me so many opportunities to grow with the company and grow to love the newspaper industry. Her love of journalism and the employees of the Winchester Sun were as important to her as her love for her own family. She was a strong voice for many issues throughout Winchester and Clark County.”