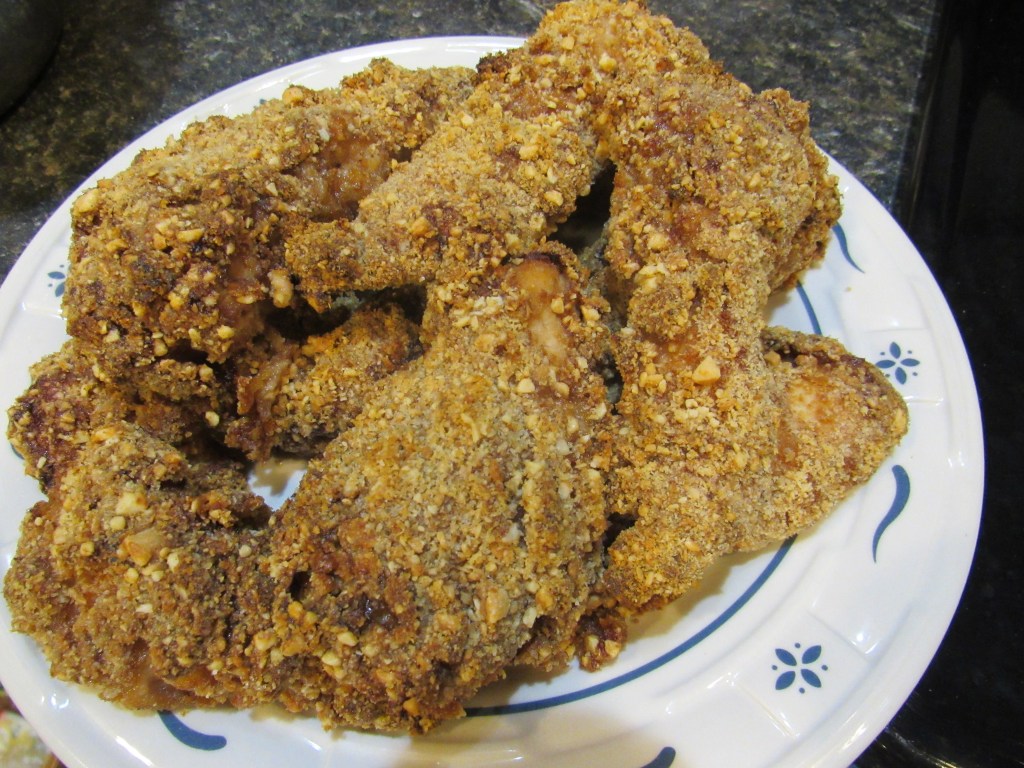 Process peanuts and next 4 ingredients in a food processor until peanuts are finely ground. Place
crumbs in a large zip-top plastic freezer bag; add chicken, and seal. Shake to coat. Place chicken on
a lightly greased wire rack in an aluminum foil-lined broiler pan.

Bake at 375 degrees for 35 minutes or until a meat thermometer inserted in thickest portion of thigh
registers 170 degrees.

It was time to come up with something to prepare for supper and I also needed a new recipe to write
about. I decided we would have chicken for supper and pulled out the folder I have that contains all
the chicken recipes I’ve collected over time; some from magazines and some from the internet.
When I spotted the recipe for peanut baked chicken I figured I’d give it a try. I had all of the
ingredients which is a plus. Since I don’t care for dark meat chicken, I used boneless chicken breast
instead.

I asked Brad what time he wanted to eat and he said 5:30 (we like eating earlier rather than later and that is possible since we are both retired).
At about 4:00 I re-read the recipe and since the chicken needed to marinade I got started cleaning the chicken (you know, removing any bloody veins, fat, and anything else I don’t want to put in my mouth) and placed the chicken in a big zip-type bag.

After about 15 minutes I was ready to put the marinade together. I put the peanut butter, soy sauce, honey, lemon rind and lemon juice in a bowl and microwaved it for 1 minute. It was kind of lumpy, but after giving the mixture a good stir it all come together in a smooth consistency. I poured the peanut butter mixture over the chicken, zipped the bag, and gave the chicken pieces a good work out getting every piece covered in the marinade. Into the refrigerator it went. Every 10 minutes I massaged the chicken to make sure the meat stayed coated.

While the chicken sat in the refrigerator, I added the peanuts, breadcrumbs, minced garlic, salt and red pepper to my little hand crank food processor. The recipe called for 1/4 teaspoon of red pepper but since I don’t like spicy food I didn’t add that much; I probably put in a little more than half what was called for. After several cranks on the handle of the processor the peanuts were ground pretty fine and I poured the crumb mixture into a quart size zip-type bag; now all I had to do was wait while the chicken absorbed the peanut marinade.

When the timer sounded, alerting me to the fact that the chicken was done marinating, I turned on the oven, lined a baking sheet with foil, and topped the lined baking sheet with a cooling rack sprayed with non-stick spray. Instead of placing all of the chicken pieces in one big bag of crumbs I removed each individual piece of chicken from the thick marinade and coated them with the peanut crumb mixture.
Each piece went from one bag to the other and then straight onto the rack on the baking sheet. Into the oven the
chicken went and I got started making the accompanying side dish that the chicken recipe recommended (I’ll tell you all about that recipe next week).

I baked the chicken for about 45 minutes, since I like my chicken done, and we were ready to eat. Brad and I sat down at the table and Brad said the prayer, thanking God for all our blessings including the food and this season of the year that we celebrate Christ’s birth.
We filled our plates and began to eat. To my surprise the dish was a bit spicy but I kept on eating.
Finally, I asked Brad what he thought and he said it was okay, but it was spicier than he thought it would be (both the chicken and the accompanying dish had pepper in them). We decided the heat was coming from the chicken and I told him that I’d only used about half what the recipe said to use.
While we were eating and talking we decided this dish really isn’t something we want to have again.

If by chance I do fix it again I would not add any red pepper.

To Brad’s disappointment there was enough chicken left over for the next night. Before putting the chicken in the refrigerator he scraped the coating off of each remaining piece. The chicken reheated nicely and was only a tad spicy; I was able to handle that and didn’t think the peanut chicken was too bad the second time around.

It’s hard to say if this dish is a Nailed It or Failed It. I believe I Nailed the preparation, but for our taste buds it’s a Failed It. If you like spicy food, don’t hesitate to make this because I don’t think you’ll be disappointed.