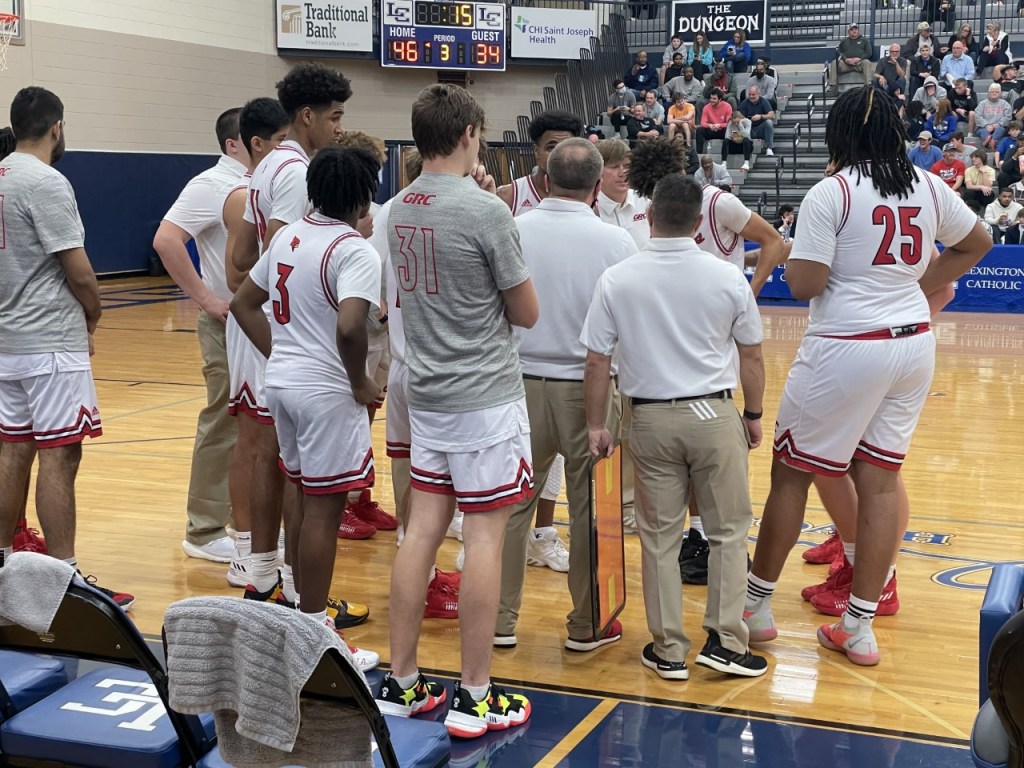 By Matt Cizek/Contributor       Playing a hungry Woodford County High School team, George Rogers Clark found themselves against stiff competition eager to prove itself Wednesday afternoon in the opener of the White, Greer & Maggard Holiday Classic. Nevertheless, they were ready to respond.

Trent Edwards led the Cardinals with 15 points, as they were able to outmuscle the Yellow Jackets 68-60 in front of a full gym at Lexington Christian Academy. Coaches from several colleges – including Kentucky State University – were present to watch.

“We had a good first quarter as far as being aggressive, trying to get to the rim and make plays,” Head Coach Josh Cook said. “We got stops when we needed to. They’re a very nice basketball team.”

That strong start was emphasized by Jerone Morton who scored on a layup off the opening tip-off to give the Cards their first lead of the game.

However, the Yellow Jackets – whose only official loss coming into Monday happened to be a forfeit against Danville due to a self-reported violation – continued to be a thorn in the Cards’ side.

With every shot GRCHS took, Woodford County seemed to answer back. And, although the Cards ended the first quarter with a 4-point lead after a three-point shot by Morton at the buzzer, the lead wouldn’t get much larger as they went into halftime leading by only 6 points.

As the second half wound down and the third quarter began, it looked like the Cards had taken control for good. Forcing five quick turnovers, they were able to establish a 14-point lead early in the third period.

In a physical game, the hard-fought aggressive of both teams didn’t go unnoticed, as the Cards had three players end the game with four fouls while the Yellow Jackets had four players finish with three.

“Our guys take a lot of pride defensively, and they want to do their job as far as guarding good defensive players” Cook said. “We have several guys who want to do that, and know that’s their job.”

Among players that the Cardinals were able to limit was freshman Jasper Johnson. After getting nine points in the third quarter following a trio of three-point shots, he was only able to get three total points the rest of the game.

As the top team in the 8 th Region though, Woodford County wasn’t about to go away without a fight. A 14-point lead quickly evaporated, as the Cards only found themselves by 4 points with just as many minutes left in the 4th quarter.

However, solid defense and free-throw shooting – including four consecutive free-throws made by Edwards – helped pad a convincing lead.

“You could tell we got tired, but we showed poise in the end and were able to put it away,” Coach Cook said.

For his part, Edwards also led the team with 10 rebounds in an impressive showing for the junior forward.

“We practice a lot on free throws,” he said. “I see myself as a leader by seeing everything from the back [defensively], and telling people what’s happening.”

Three other Cardinal players made it into the double digits with point totals, including Tanner Walton (12), Jerone Morton (12), and Sam Parrish (11).