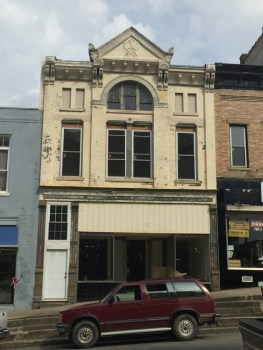 Sisters Peggy and Wendy McAllister of Bee & Clover Renovations have a passion for restoring historic buildings. Photo shows 11 S. Main Street while the renovation was ongoing. “I just got this wild hair that I wanted to restore an old building,” Wendy McAllister said. “I came over to Winchester and saw this building on South Main that has a courtyard in it, and I was like ‘Oh, I’ve got to buy this building.'" (Photo submitted by Peggy McAllister) 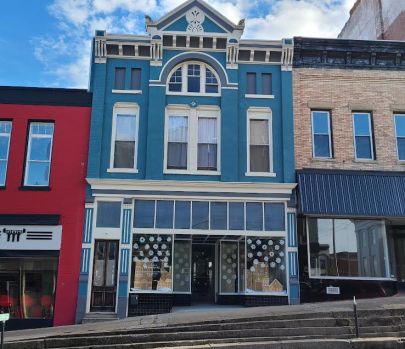 The building as it stands in December 2021. It is currently occupied by the Winchester Design Studio, a venture run by the city and the University of Kentucky. (Photo by Warren Taylor) 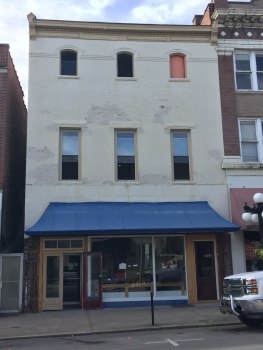 The sisters next project was 30 South Main Street. Work on it started in the middle portion of 2018. (Photo submitted by Peggy McAllister)

The blue building with white trim at 11 South Main Street in Winchester is a handsome and inviting structure that rests snuggly between its two well taken care of neighbors.

The building currently houses the Winchester Design Studio, an education and community outreach venture run by the city and the University of Kentucky. It would have been hard to see someone giving the building a second glance in 2016, let alone wanting to sink significant sweat equity into restoring it rather than gutting and fully modernizing it.

It might have stayed that way if not for a feature not visible from street level.

“I just got this wild hair that I wanted to restore an old building,” Wendy McAllister said. “I came over to Winchester and saw this building on South Main that has a courtyard in it, and I was like ‘Oh, I’ve got to buy this building.’”

McAllister has over 20 years of experience as a landscape architect and had plans for the courtyard before anything else.
Her sister and future partner in Bee & Clover Renovations, Peggy McAllister, offered a blunt assessment of the courtyard’s shape five years later.

“That courtyard was an overgrown weed patch that had trash and everything filled in it,” she said.

Peggy, who has a background in graphic design, did agree with her sister that the building had potential and decided to join the project to initially make sure that contractors showed up for work.

She was a self-described construction novice in those days, compared to her sister, who had some experience, and called the renovation a “pretty big project” since it was in a historic building.

“That’s very different from a lot of other construction in that you have to work with what is there, and there are some real specific things that sometimes people aren’t aware of,” Peggy McAllister said.

Working with what was already in the building meant dealing with water damage and the unknown of what lay under generations-old crown molding and paint.

In short, it was the perfect two-year project for two people that love old things and the ways things were built in times gone by.

It was a project that led to another renovation, which started in 2018, that turned 30 North Main Street into the fashionable downtown eatery, La Trattoria.

And it was a project that helped the McAllisters accumulate a wealth of wisdom that would benefit an area of town ripe with buildings with potential.

The McAllister sisters have always loved antiques and history, or as Peggy put it, “Weird rusty things you find at yard sales.”

So the real fun to them is finding old items and refurbishing them during the renovation process.

“I like reusing things. I like that concept of taking something and upcycling it,” Wendy McCallister said.

The process is like a treasure hunt in that it yields riches in historical knowledge and fascinating items.

“Your goal is to highlight those things,” Wendy McCallister said about the end result.

Peggy explained that they cannot keep and upcycle everything they find, but the craftsmanship from long ago makes many things more salvageable than one might think.

“We’ve always appreciated a lot of the artistry of back in the day; things that they did a lot more detail in the construction,” she said. “Back in the 1800s and the 1900s, things were more ornamental, and construction quality was really pretty high. A lot of fine work was done.”

During the early days of the renovation at 11 South Main, the sisters found a tin ceiling. At the turn of the 20th century, stamped tin plates were added to ceilings and then painted to give them an ornamental look.

Peggy said that exposing and cleaning up the ceiling “added a lot of pizzaz to the place.”

As the work continued, the McAllisters found a three-foot-tall glass panel above the storefront doors that had previously been covered with metal.

The windows were in near perfect condition and flooded the space with natural light.

Their next find came during the renovation at 30 North Main, where La Trattoria is presently located when they tore down an outdoor staircase that had fallen into severe disrepair.

“We found the original stringers, and that is where the steps attached,” Peggy McCallister said. “It’s a big, long piece of wood that is cut in notches to put the steps in.”

The three stringers were 25 feet long, 14 inches wide, and perfectly straight. They were also in excellent condition, so the McAllisters repurposed them, and two now serve as the bar tops in the restaurant.

However, between the joy of discovery is a tremendous amount of hard work.

The Do’s and Dont’s

At the age of 7, the McAllisters started getting their first lessons in renovation from their mother.
“If you saw pictures of us, you would see us stripping wallpaper and doing all sorts of projects in the house,” Wendy McCallister said.

Combine that with Wendy’s prior professional experience, and the sisters were fairly comfortable doing construction work. Still, both admitted they made plenty of mistakes and learned a lot on the fly during their first project.

The process is not so daunting that it should scare someone off with no experience.

“I’d say if you’ve got the will and the vision to do it, that it is possible for anybody to do this kind of work,” Wendy McAllister said.

Just do not expect the process to be as quick and easy as shows on HGTV make it out to be.

One’s best option before jumping in feet first is to do extensive research about what they want to do and how to do it.

The next thing is often the most challenging part: balancing the books.

“We went into it with a plan and a vision, but there is a business part to the equation that we always temper with our vision to make sure our timeline is going the right way,” Wendy McCallister said.

Having a realistic timeline is another way to ensure a project is successful.

Projects featured on home improvement television channels have a quick turnaround time because of the host’s experience and familiarity with contractors.

It will not be that way for the typical first-timer.
“The reality of it is that if you haven’t done this before and you don’t have a whole set of contractors–you build that up as you go–it is going to take more time than you think,” Wendy McAllister said.

A reasonable timeline ranges from a few months to a few years, and that is because structural issues in a building can be easily glossed over with heavy paint or plaster.

That is why some contractors are hesitant to work on older buildings.

Wendy said she recommends doing all demolition work before consulting with a contractor. The contractor then has an accurate lay for the building and can offer the most realistic estimate for the project’s cost.

And for anyone looking to start a renovation project of their own, Winchester is a great place to start.

An Exciting  Place to Be

Downtown Winchester is in the middle of a tremendous time of revitalization, which is one reason why the McAllisters were attracted to the community.
“Everybody there is really friendly, helpful, and enthusiastic about wanting to rehab that downtown,” Wendy McAllister said. “A lot of people tell us stories of how downtown used to be and how vibrant it was.”

The McAllisters are committed to being part of the comeback and are already working on their third renovation at 34 North Main Street.
They have also started renting out the second-floor apartment above La Trattoria on Airbnb, and it has been a hit.

Downtown has played a factor in that.

“People are surprised there is so much going on. There are a lot of shops and restaurants that are open right now,” Peggy McAllister said. She also noted that commercial activity has picked up in the last two or three years with more room to grow.

For anyone interested in joining the downtown scene as a merchant or building owner, Peggy said she recommends checking out the resource section on the Main Street Winchester website www.downtownwinchesterky.org/resources.