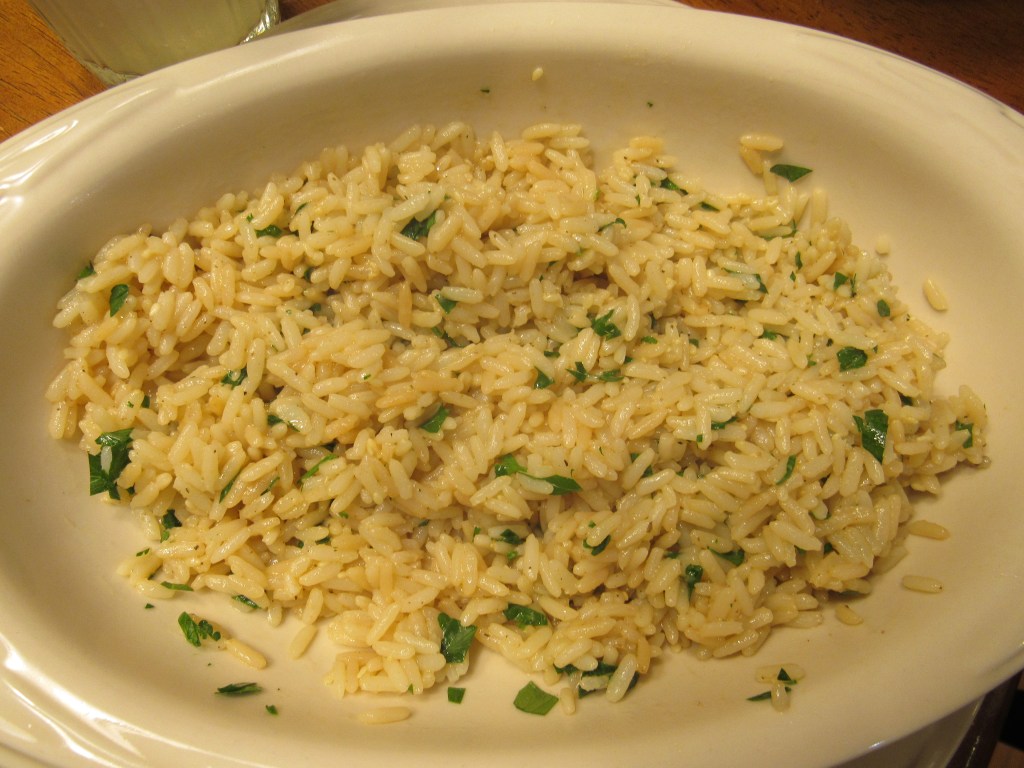 Sesame ginger rice makes for an enchanting side dish.

Melt butter in a 3 1/2-quart saucepan over medium-high heat. Stir in rice, and sauté 2 minutes or until rice turns opaque. Stir in sesame seeds. Add chicken broth and next 3 ingredients; bring to a boil. Cover, reduce heat to low, and cook mixture 20 to 25 minutes or until liquid is absorbed and rice is tender; fluff with a fork. Stir in 2 Tablespoons chopped parsley. Garnish if desired. Well after last week’s half failure I’ll tell you all about the recipe recommended to go with the peanut baked chicken.

You may remember the recipe appeared an issue of Southern Living magazine.

As soon as the chicken went into the oven to bake I got started making this rice dish. I melted 2 Tablespoons of butter in a saucepan and then added the rice. While the rice sautéed, I combined the seasonings (1/2 teaspoon each of salt, ground ginger, and pepper).

I sat the seasonings aside until they were needed. Once the rice seemed to be opaque, which was more like 7 or 8 minutes instead of the 2 mentioned in the recipe, I added the sesame seeds. I reread the recipe and saw that I was only supposed to use 1/4 teaspoon of pepper instead of the 1/2 teaspoon that I’d stirred together with the salt and ginger and since I don’t like spicy I dumped the seasonings out and started over, adding exactly what the recipe called for and then pouring in the chicken broth.

I gave the mixture a stir and let it come to a boil, covered the pan and turned the heat down to low to let the rice simmer. Typically it takes about 25 minutes for rice to be done, but this time it took about 35 minutes for all of the liquid to be absorbed.

Once the rice was nice and fluffy Brad came into the kitchen and I asked him if he likes parsley and he said “a little.” I had at least 2 Tablespoons of chopped parsley standing by to add to the rice.

Since I wasn’t sure if Brad would like it, I opted to put half the rice in one bowl and half in another and add half the parsley to one of the bowls. If we liked if, I’d add the remaining parsley to the other bowl.

After Brad’s prayer we put rice on our plates and put the chicken on top. We began to eat and you know the story about the dish being a bit spicy for us. At first I thought the spiciness was the ground pepper in the rice, since I’d used the entire amount the recipe called for instead of cutting it in half.

But as we continued to eat, we realized the heat was coming from the chicken.

Brad and I decided we did like the parsley added to the rice dish. We also decided that we wouldn’t mind having this rice dish with some other type of chicken; it was a Nailed It as far as we were concerned and I’ll hold on to the recipe for another “chicken for supper” night.