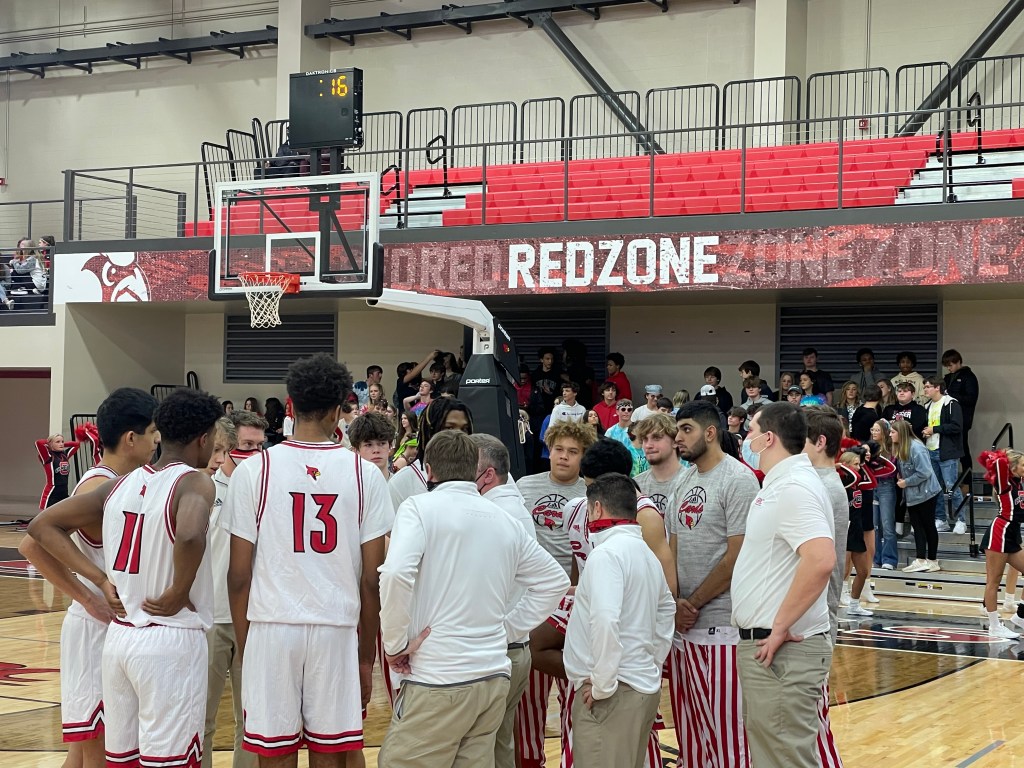 Surrounded by GRC Cardinals who go onto tame the Paris Tigers 89-21 Tuesday night, Coach Josh Cook tells the home team to play with speed, intensity -- always make it a high tempo game. After the game, Cook said, “For a team like ours, speed is huge…especially to be able to do that when you’re in the driver’s seat. It’s been good the past few weeks, when we know we’ve had to control tempo at different times.” (Photo by Matt Cizek)

It might be an exaggeration to say that a team has ever game planned to lead by more than 30 points at the end of the first quarter of play.

However, that’s exactly what the George Rogers Clark Cardinals were able to do Tuesday night in Winchester.

The Boys basketball team began the 2022 portion of their season with a dominant 89-21 victory against the Paris Greyhounds (3-8).

“There’s a standard now for our guys, they’ve got to play at a high-level night in and night out,” GRC Coach Josh Cook said. “It’s still a process, but for the most part they understand.”

In a flash, the Cards jumped out to a double-digit lead to begin the first quarter, eventually opening on a 31-0 run before ending the opening period with an insurmountable 35-2 advantage.

Tanner Walton scored 10 of his 12 points in the opening period, while Sam Parrish put down 8 of his 11 during the same time
frame. Trent Edwards – who led the team with 16 points and tied senior Armaan Manak for the lead with 4 rebounds – had 12 points by the end of the first half.

“For a team like ours, speed is huge…especially to be able to do that when you’re in the driver’s seat,” Cook said. “It’s been
good the past few weeks, when we know we’ve had to control tempo at different times.”

Not to be outdone by its highly-potent offense, the Cards came up strong on the defensive side of the ball. Strong pressure forced over 20 turnovers, several of which took place before the Greyhounds were able to score an initial basket. Paris was limited to a 19.5% field goal percentage, converting just 8 of 41 field goal attempts into points.

“We really focus hard on playing defensively, and getting stops. That’s a big key to our success right now,” stated Jerone Morton, who finished with 15 points and 3 rebounds. “We just work on playing hard and doing better.”

In many cases, a 48-point halftime lead could be cause for complacency. However, with much of the season left to be played, there’s always room to look for improvement and changes.

“[We looked to] find something to get better,” Cook said. “We tried a different defense there [in the second half], putting a bigger team on the floor. It’s something for us to look at long-term, hopefully we’ll be able to use it in a game.”

Among other standout performances Tuesday night, sophomore Reshaun Hampton had a season-high 12 points. Fellow sophomore Brady Davis, junior Kareem Guerrant, and Manak were able to put up baskets as well. J.P. Gaines, Jaylen Berry, and Chester Abbott saw in-game action on both floors of the court.

“When you have a really good basketball team, there’s so many guys that are a part of that that go unnoticed,” Cook said. “We have some great guys in practice who don’t get enough credit, and it’s really important for us as far as chemistry wise.”

Kentucky offense stalls without sparkplug Wheeler in loss to…