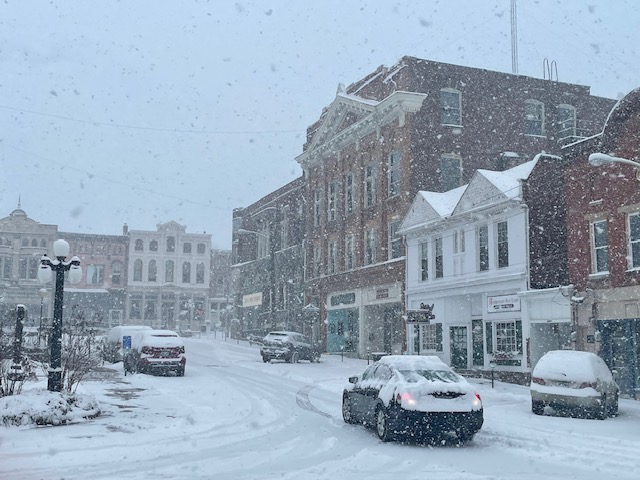 Motorists found driving conditions challenging Thursday as more than three inches of snow fell across Winchester. Several crashes were reported between the 101 Milemarker and 104 Milemarker on I-64 in Clark County. Both east and westbound lanes were shut down. (Photo by Samantha Layton)

A winter storm marched through Clark County Thursday leaving several inches of snow and ice in places near and far.

According to the National Weather Service, a Winter Weather Advisory was in effect between 10 a.m. and 10 p.m. Thursday.

Total snow accumulations was expected to be between one to three inches with peak snowfall between noon and 6 p.m. across the region in portions of central Kentucky north of the Western Kentucky and Blue Grass Parkways, NWS reports.

However, snowfall appeared to exceed 3 inches in the downtown area late Thursday.

Because of the storm and I-64 being closed, Sun decided to print the weekend edition on Friday, which will affect delivery.

This story will be updated on the web and shared to social media as the Sun gets more information.

Clark County Roads/Solid Waste Department posted Thursday to social media that it anticipated a route completion time of between six to eight hours to clean county roads — that is a one time/plow through.

“This event may take multiple cleanings depending on the final amount we receive,” the post said.
First responders were busy tend to vehicle accidents and assist motorists. Early reports indicate that traffic was slowed almost to a standstill in many well-traveled parts of town — 15 mph on Bypass Road by the major shopping plazas.

Several crashes were reported between the 101 Milemarker and 104 Milemarker on I-64 in Clark County. Both east and westbound lanes were shut down Thursday afternoon.

“We appreciate our families, community, and school teams during these challenging situations and respect for safety. A huge thank you in advance to our road crews, law enforcement, and first responders that serve Clark County,” CCPS said.

CCPS was still determining its course of action for Friday’s classes before the Sun’s press time.