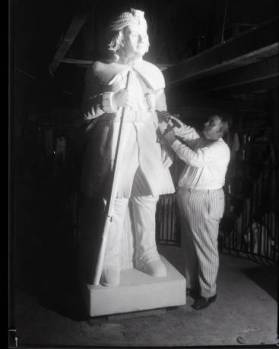 Albert Daniel Fisher (1880-1948) a Winchester monument dealer carved the Daniel Boone statue (some say in his own likeness) in his garage on Short Street and was paid $1200 for the work. (Submitted photo) 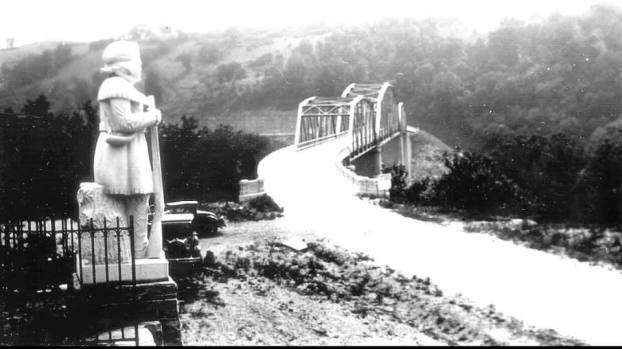 Photo of the original Boonesboro Bridge and the limestone statue of Daniel Boone that was located near the Clark County side of the bridge for many years. (Submitted photo) 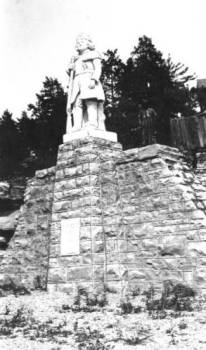 All I wanted to know was if the original Boonesboro Bridge and the limestone statue of Daniel Boone that was located near the Clark County side of the bridge for many years had a common denominator.

I knew they came into being about the same time and felt they were connected in some way. I started digging around hoping to find out. Albert Daniel Fisher (1880-1948) a Winchester monument dealer carved the Daniel Boone statue (some say in his own likeness) in his garage on Short Street and was paid $1200 for the work.

Lacking the full amount due Fisher, the Junior Rotary Club (Russell Grant, President) of Winchester raised the remaining $400 in donations by going door to door in Winchester. The statue setting atop a stone pedestal was dedicated overlooking the bridge on July 4, 1933. Codell Construction built the base at no cost. Misses Rose Mary and Alice Codell daughters of Mr. and Mrs. J. C. Codell unveiled the statue as the “Star-Spangled Banner” played.

Many central Kentuckians participated including Clark County Judge J. M. Stevenson, Judge Samuel Wilson (well-known Lexington historian), Children of the American Revolution, the Man-o-war Drum and Bugle Corp post #8 as well as State and local dignitaries. It is said that as many as 1500 attended the event.

Originally the Pioneer Memorial Bridge (Boonesboro Memorial Bridge) was dedicated at the Boonesboro Dance Pavilion on a rainy November 11, 1931. Bands played and patriotic songs were sung. Ben Johnson, State Highway Commissioner, several state and local officials including senators and circuit judges participated. Keen Johnson, editor of the Richmond Register and future Kentucky Governor spoke about Armistice Day on behalf of the Richmond and Winchester American Legions. The construction of the bridge was funded by the Murphy Toll Bridge Act passed by the Kentucky Legislature in 1928. The act authorized the State Department of Highways to construct bridges over rivers and large bodies of water.

The source of funds was the sale of bonds secured by the bridges and the tolls generated thereon. The cost to cross the Boonesboro bridge was five cents (there are some who say forty-five cents, but I think five cents was most likely). The bridge replaced the ferry that had been granted to Colonel

Richard Calloway in 1779 and carried traffic between Clark and Madison Counties for 132 years. It continued to operate even after the bridge opened as some either could not afford the toll or were afraid to use the new bridge.

The bridge debt was freed (paid off) marked by a ribbon cutting ceremony and celebration on August 25, 1945, attended by Clark County Judge V.W. Bush, Lieutenant Governor Tuggle, and many others.

As near as I can tell the Daughters of the American Revolution was responsible for the renaming of the bridge and not
associated with the Winchester Committee who initiated the Daniel Boone statue and 4 th of July celebration.

We all know that the old Memorial Bridge was replaced with a new bridge in 1994 and is named after Winchester’s own Ewart Johnson (1922-2012), a local businessman and Kentucky State Parks Commissioner (1971-1975). The Daniel Boone statue had was moved to allow construction of the bridge.

After being stored inside the Boonesboro Quarry for a few years it was finally placed at College Park where it stands today.

The Boonesboro bridge has a long and interesting history. First a ferry, then a 1931 bridge dedication, a 1933 4th of July
statue celebration, a 1945 freeing the bridge event, and then a new bridge in 1994. All good reasons to commemorate.

Now I am wondering if Ewart Johnson (the current bridge’s namesake) is related to either Ben or Keen Johnson who
spoke at the dedication in 1931.

Attorney Robert Blanton is a Clark County Magistrate with a deep knowledge of local events and history.