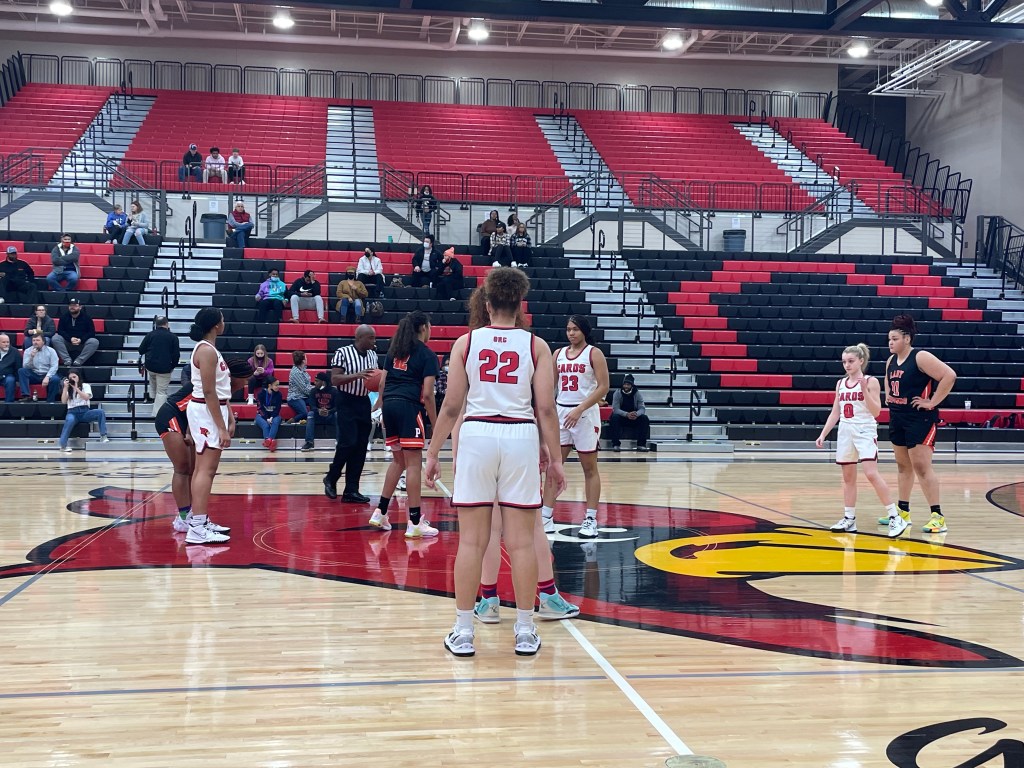 Looks to be a tipoff to kickstart a game that ends in triumph for the Lady Cards against the Paris Greyhounds on Tuesday at GRC Arena. GRC Junior shooting guard No. 23 Brianna Byars (center) scored 20 points, leading the team in scoring. (Photo by Matt Cizek)

“We were able to get some offensive rebounds and putbacks, and we got some better shots. It was a very tough, physical game…but we were able to convert,” GRC Coach Robbie Graham said.

During a battle between two top teams in the Eastern Kentucky region, the Lady Cards from George Rogers Clark High School took on the Paris Greyhounds Tuesday night in Winchester.

Following a tightly-fought defensive battle, GRCHS came out on top 50-31 in a game much closer than the final score might have suggested.

“We want to use ball pressure and create turnovers, hopefully get some easy baskets,” GRC Coach Robbie Graham said.

Creating turnovers was certainly a part of the game plan that the Lady Cards were able to follow through on. Defensive
pressure helped force Paris into seven turnovers in the first quarter alone, with 20 total by the end of the game.

On a night in which the Boys’ Basketball team held their opponent to two points in the first quarter, the Lady Cards had reason to be proud as well.

They largely kept the Greyhounds off the scoreboard in the opening eight minutes, allowing just five points through the end of the first quarter. They ended up going into halftime with what felt like a comfortable 24-13 lead.

However, showing why they had won five consecutive games – including the Eminence Holiday Tournament – Paris was able to deliver a scare to the Lady Cards in the third quarter.

They twice narrowed the margin to within a single possession, and ultimately left the Cards holding onto on to a mere six point, 30-24 lead at the end of three periods.

“Defensively, they did a good job of playing zone. We didn’t execute our zone offense as well as we needed to,” GRC Coach Graham said. “We gambled a few times [defensively]. It made our numbers five on four, and they were able to…get a couple baskets there, which kept them in it. They stuck around.”

However, once the fourth quarter began, the tide turned in the Lady Cards’ favor. Outscoring Paris 20-7, they were able to find their offensive groove and ride the momentum toward victory.

“We were able to get some offensive rebounds and putbacks, and we got some better shots,” Graham said. “It was a very tough, physical game…but we were able to convert.”

Continuing to lead the charge on offense was junior Brianna Byars. She scored four of the team’s six points in the third quarter to keep them in the lead, and finished with 20 points overall. 12 points came in the first and 4th quarter to account for a strong start and finish.

Other scorers included Makili Tabor, Asja Garrard, Jaylyn Goodwin, and Tyra Flowers – all of who loomed large in the 4th quarter as the Lady Cards’ offense broke the game open.

“We have 16 kids who practice with us every day, and we tell them ‘you’ve got to be ready [because] you could go from zero minutes to ten minutes or ten minutes to twenty or whatever,’” Graham said. “It’s definitely a positive to get bench play. Hopefully, we can continue to develop more depth.”

Matt Cizek wrote this for the Winchester Sun.