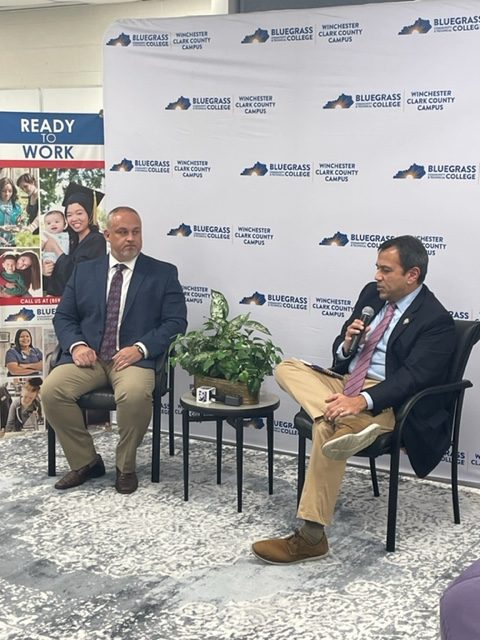 Quote — “It’s really a HIPAA violation for an employer to ask for a vaccine card. The vaccine mandate, that is something that I’m strongly against. I feel like we live in the United States of America, that your healthcare is your business,” said state Representative Ryan Dotson, R-Clark County.

The Kentucky General Assembly gaveled into session on Tuesday, but Clark Countians got a sneak peek of what to expect on Monday.

The legislature will tackle issues such as the biannual budget and privacy issues regarding vaccination status during what looks to be an action-packed session.

The most pressing issue for the legislature is setting the commonwealth’s state house and senate electoral districts and its congressional ones.

“That is the forefront of what is on everybody’s mind right now,” Dotson said. “I say that the first two or three weeks will probably be consumed with that. Hopefully, we will get past it pretty quick, but it is highly unlikely … There may be challenges, either from the Democratic caucus maybe from the governor himself, which it will go to court.”

Because of that, Dotson said there is uncertainty on how the process will play out.

The Republican House and Senate leadership introduced legislation regarding the districts on the first day of the session.

The legislature will also discuss its first two-year budget of the COVID-era.

“The last couple of years because of COVID, it’s been one-year budgets. They have been pretty stark,” Alvarado said.

The commonwealth’s financial status has improved though.

“I think we have got quite a bit of excess funds in the budget that we will be able to use. We are looking at about $3.1 billion in excess funds that we have, which include our budget surplus as well as ARPA that have to be designated,” Alvarado said.

The senator said that members of the senate want to put more than a billion in the commonwealth’s “rainy day fund” to maintain its credit rating and invest in different projects.

Dotson is listed as the co-sponsor of House Bill 58, which would prohibit businesses and schools from requiring employees, customers, students and job applicants from disclosing their immunization status.

“It’s really a HIPAA violation for an employer to ask for a vaccine card,” Dotson said when the bill was pre-filed. “The vaccine mandate, that is something that I’m strongly against. I feel like we live in the United States of America, that your healthcare is your business.”

Alvarado said it was a slippery slope when asked if he supported vaccine mandates.

“I don’t think that government should be mandating vaccinations. That is probably improper,” he said.

Alvarado said he would have to see the bill in its final form before he judged it and understood why people were angry about the mandates. Still, he also contended that in the U.S., no one is entitled to a job and that they are thousands of jobs in Kentucky waiting to be filled.
Expansion

The topic of expansion in Clark County was brought up several times during the question and answer portion of the event.

From his experience working in the retail industry, Dotson said many companies will not look to expand into a community unless the population is more than 50,000 people.

“We need to get our rooftops up here in Clark County,” Dotson said. “The only way we are going to do that is to expand into areas where it is more attractive to get more housing where we can have some of the really nice apartment complexes like they do over in Hamburg.”

And a way to attract real estate developers is to get funding approved for infrastructure projects, especially ones pertaining to transportation.
Alvarado said any revisions to Kentucky’s tax code would help and mentioned a concept called the local option sales tax.

“It would give local governments the ability to at least put something on the ballot to say something like, ‘Hey Clark County if you want to build a massive baseball stadium here if we charge ourselves one percent extra tax we can pay it off in so many years,’” he explained.

If approved by the referendum, the tax would expire after the project’s completion.
Alvarado also said that tax code revision would make Kentucky more competitive with surrounding states in attracting new residents.

Alvarado and Dotson have already attached their names to bills that have been introduced on their respective chamber floors.
Dotson is listed as the sponsor or cosponsor of seven pieces of legislation, including the bill mentioned earlier pertaining to the disclosure of vaccination status by employers and businesses.

Two cosponsored bills pertain to benefits and COIVD-19. House Bill 54 would create workers’ compensation liability for employees who have an adverse reaction 14 days after an employer-mandated COVID-19 vaccination. House Bill 56, a cosponsored bill, would create a presumption that any first-responder who dies of COVID-19 did so in the line of duty and would qualify for death benefits.

House Bill 18, which Dotson is one of many cosponsors on, would prohibit instruction and discussion of designated concepts related to race, sex, and religion at public secondary and post-secondary education institutions.

House Bill 23, another cosponsored bill, would require high school athletes to compete in a division based solely on their biological sex.

Alvarado introduced Senate Bill 11, a piece of legislation he called “a very big bill” and an “industry bill that has been worked on for two years”.
SB11 would put personal care and assisted living facilities under the supervision of the Office of the Kentucky Inspector General and provide a modern structure for the regulation of said facilities.