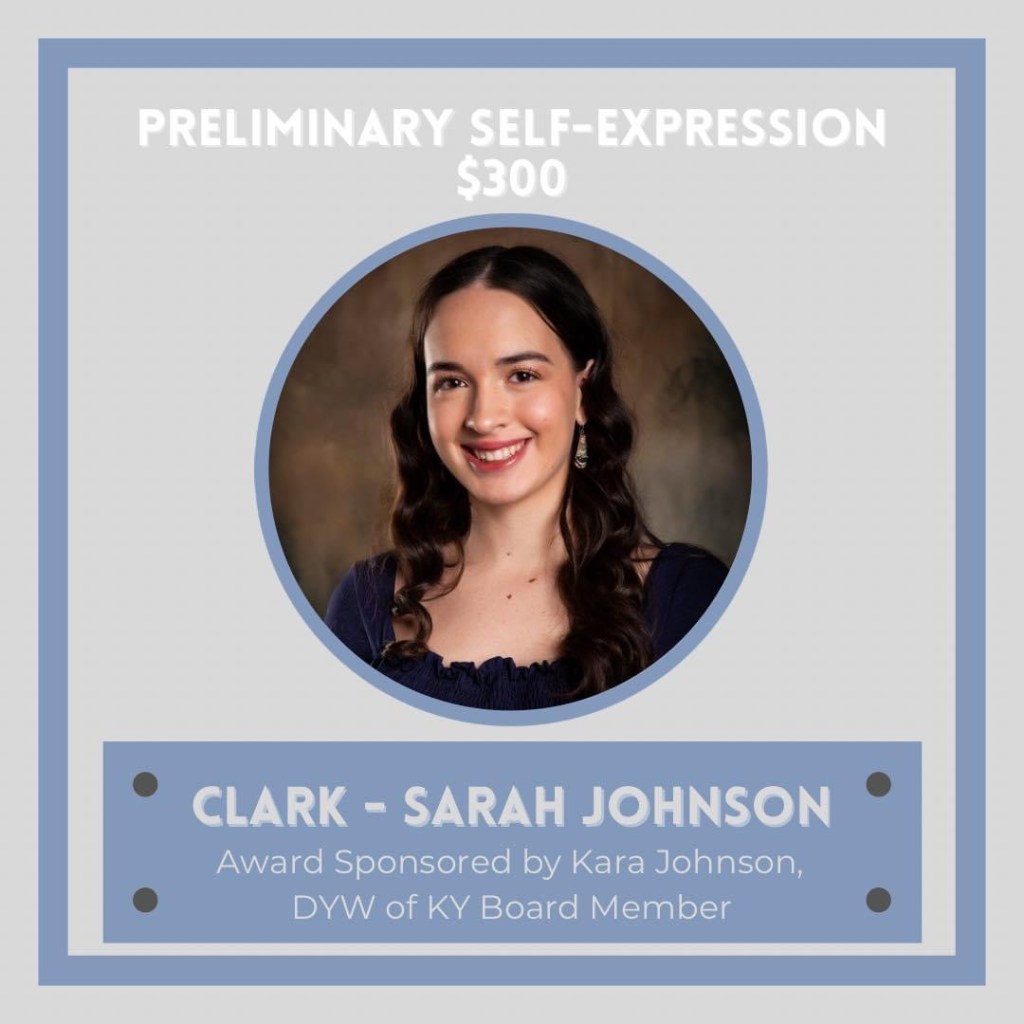 One of Clark County’s best and brightest, Sarah Johnson placed among the top five in the Distinguished Young Woman of Kentucky competition, a national scholarship program that promotes and rewards scholarship, leadership and talent in young women. Representatives from each county competed last weekend to see who would represent Kentucky at the national level.

“I was overjoyed to be named Clark County’s Distinguished Young Woman back in August,” said Johnson, a senior at George Rogers Clark High School. “Representing Clark County at the state program was an honor and is an opportunity I will forever hold close to my heart.”

“This past weekend, Sarah showed the state of Kentucky that with such hard work, talent, and determination you can achieve success,” DYW chairwoman for Clark County Donna Fuller said.

Johnson is managing editor of Smoke Signals Student Media at GRC and she’s involved in Beta Club, National Honor Society, Mock Trial, Cards for Paws and Pep Club. Intent on being a doctor, Johnson plans to attend University of Kentucky to study neuroscience.

One of Johnson’s many talents is dancing, so she performed a contemporary dance routine that the judges gave her high marks for during the competition. But to borrow a phrase, it’s not all fun and dance as contestants had to answer questions drawn out of a fishbowl; answers that took depth and understanding.

“I spoke about my generation’s priority to break the stigma surrounding mental health,” Johnson said.

“Anyone considering doing the DYW program should definitely go for it,” she said. “It is an amazing experience. It allows for so much self growth and is an amazing opportunity to build relationships with other young women.”

Fuller added, “I continue to be amazed each year at the wonderful young ladies who participate and represent the Clark County Distinguished Young Woman scholarship program. Their talent and determination to be their best self is remarkable. Every achievement they earn, big or small, we love to be a part of.”

Fuller said the Clark County DYW program has a great bunch of volunteers that are so fortunate to be a small part of these young ladies’ journey.
And Fuller offered a big thank-you to Sarah Johnson’s family “for sharing their beautiful daughter with us. You are now and forever a part of the DYW family — the WOO HOO committee.”