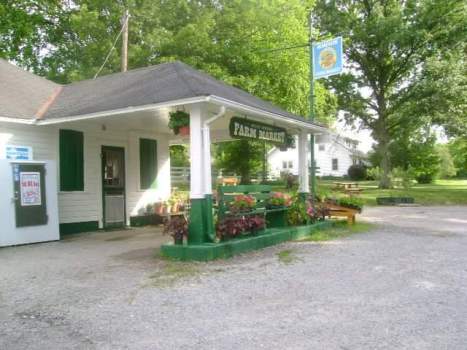 The market building is over 80 years old and has housed several small groceries over the ensuing decades. (Submitted photo) 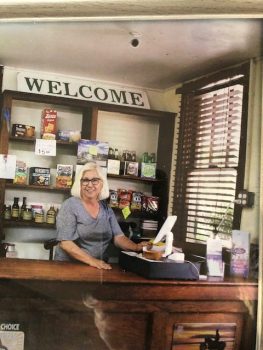 Beech Springs Farm Market owner Mary Beth Hendricks knows many of the her customers on a first-name basis when they stop to chat and shop at this store with its long legacy of serving Clark County. (File photo/Winchester Sun) 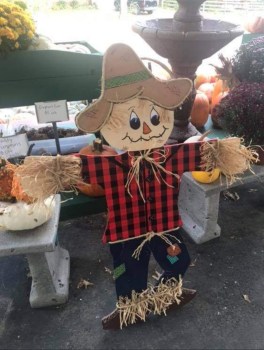 One of the market’s big draws in the autumn was its scarecrow festival. (Submitted photo)

Mary Beth Hendricks describes herself as a young 70 years of age but she is ready to let a new generation take up the ways of minding a market.

Hendricks announced in a Facebook post last month that she is stepping away from Beech Springs Farm Market and looks forward to “resting my knees, seeing more of my family, and experiencing new adventures.”

The market was opened in 2006 by Hendricks and her late husband, John. It became known in the area for its chicken salad, scarecrow festival, dedication to local products, and overall vintage vibe.

A familiar face, Bailey Milheiser, will be running the market starting this coming spring when the store reopens in early March.

“The girl who is going to be taking it over has worked for me part-time for four years,” Hendricks said. She added that Milheiser’s family will help out and that they do not plan on changing much.

And besides the times and people, not a lot has changed at the market site that is a direct tie back to what feels like a lost America.

A Little Country Store
The market building has been in Hendrick’s family for decades. Her grandfather, Porter Flynn, built it in the early 1940s and according to family lore, he put the roof on it during one of the most infamous days in American history.

“I always heard they were putting the roof on the day they bombed Pearl Harbor,” Hendricks said.

Sadly, Porter Flynn would pass away when his granddaughter was only three years old. Her grandmother, Bernice “Oakie” Flynn in turn managed the property and rented it out to several different storekeepers; there were never any rental agreements, just a word of mouth contract.

The building was in a prime location on a busy stretch of highway, U.S. 227, during a three-decade period where Americans fell head over heels in love with road trips and so the store offered services that travelers needed.

“It had a lot of traffic,” Hendricks said about Old Boonesboro Road in those days. “They had gas pumps and originally they had a place to work on cars in there, that didn’t last long … Of course it sold lots of tobacco products, chewing tobacco and pipe, and all kinds of crackers, groceries and things.”

Hendricks described that period in history as “the booming days of the little country store”.
The boom ended in the early 1970s when the highway was taken over by the commonwealth of Kentucky and portions of it were rerouted to form the new Kentucky Route 627.

The road work made the highway a straighter drive but cut off the Flynn property from the lucrative traffic flow.

The building eventually passed ownership to Hendricks and her husband, John. They continued to rent it out until 2007 when the last tenants vacated the building.

That is when they decided to take a chance and run a business there themselves.

Market Memories
The market is named after the Hendricks’ farm and their original idea was to sell products they grew there.

“When we first opened we thought we were going to grow our own vegetables,” Hendricks said.

The couple had experience selling homegrown produce from their garden at local farmers’ markets, but nothing prepared them for the sheer scale of trying to grow for retail.

“One year, I don’t know how many acres of tomatoes he put out, but that did me in,” Hendricks said. “We couldn’t take care of them. It was hard for us because we both had other things we were doing too.”

Instead, the Hendricks put up a gate and white fence on the new Boonesboro Road and planted an orchard of free trees.
The market attracted many people who either knew Hendricks or her family. Soon everyone, in Hendricks words, were “hearing stories and laughing about things that happened in the old days.”

Besides stories, customers came back for the fresh fruits and vegetables and the famous chicken salad that Hendricks said wore out her knees from standing and making it for hours on end.

Hendricks said that sometimes she might have been “short” with her customers as she aged but that she also liked to please them as well.
“The customers, a lot of them, I’d get to know them, I’d see them every season … Some of them I didn’t know their names but I knew their faces,” Hendricks said.

When the COVID-19 pandemic changed the lives of many of her customers, Hendricks was able to adapt for them.

“People wanted to shop small,” Hendricks said. “People would say ‘I can’t find any fruits or I can’t find this.’”

Luckily, they found those things at Beech Springs. The market also started offering new items for sale such as hot dog and hamburger buns.

Hendricks said that being a smaller business allowed for the market to be flexible in what it sold.

Throughout the years, Hendricks had plenty of part-time help.

“We liked to hire students when we could sometimes during the summer,” she said.

She recalled with pride how one became an agriculture teacher and another became a physical therapist.

Perhaps the market’s greatest legacy will be preserving the art of the little country store.

“People love the atmosphere,” Hendricks said. “They love to come out and pick up some Kentucky Proud items. We have picnic tables outside, so if it is a pretty day people can eat. We do Grippo Potato Chips and Ale-8. Some people just like to sit in the rockers on the porch. The women will come in and shop, and the men might sit outside and shoot the breeze.”