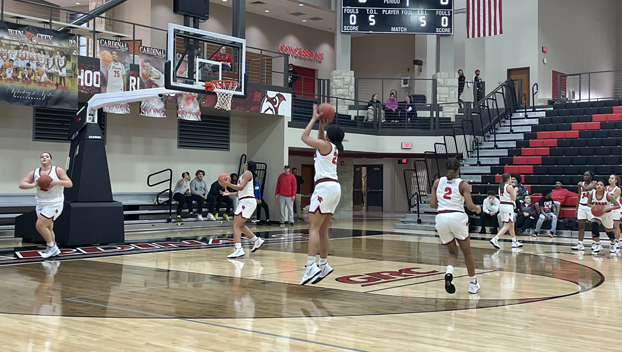 This year the George Rogers Clark High School Girls Basketball Team has made it a mission to dominate on the defensive side of the ball as much as anything.

On Tuesday night against Bourbon County, they were able to put on a display.

The Lady Cards held the visiting Lady Colonels to just 10 first half points en route to a dominant 54-15 win in Winchester. Bourbon County was unable to score a field goal until just over 2 minutes remained in the first half.

“It just sets a tone for the entire game when our defense comes out fired up and ready to play,” Coach Graham said. “We want to come out with tenacious pressure, create havoc, cause turnovers, and score off of our defense.”

The Lady Cards managed to exemplify solid teamwork by forcing 27 turnovers, 22 of which came in a dominant first half as Bourbon County was blocked on several occasions also.

Statistically speaking, a 15% field goal percentage made it difficult for the Lady Cardinals to get back into the game.

“It lets them know to trust each other. If somebody gets beat, we help,” Coach Graham stated. “It just [lets them] know that, in some ways, somebody’s got your back the whole time you’re out there.”

Offensively, while senior Brianna Byars has received much earned attention, sister Ciara Byars saw more than her share of points as well.

Despite sitting through the second half, she managed to put up 19 first half points to lead the Lady Cards on offense.

“I just wanted to show that I’m as talented as anyone else out here, how good my team was, and how I can help them,” Byars said. “Offensively, our execution and our sharp cuts [are an advantage], and we rebound the ball pretty well.”

With the starting lineup benched largely through the second half, notable players were able to see game time.

“We were able to rest our regular varsity players and play some younger players who work hard every day and deserve some minutes out there,” Graham said. “The motivation is to just keep playing hard no matter who is on the court.”