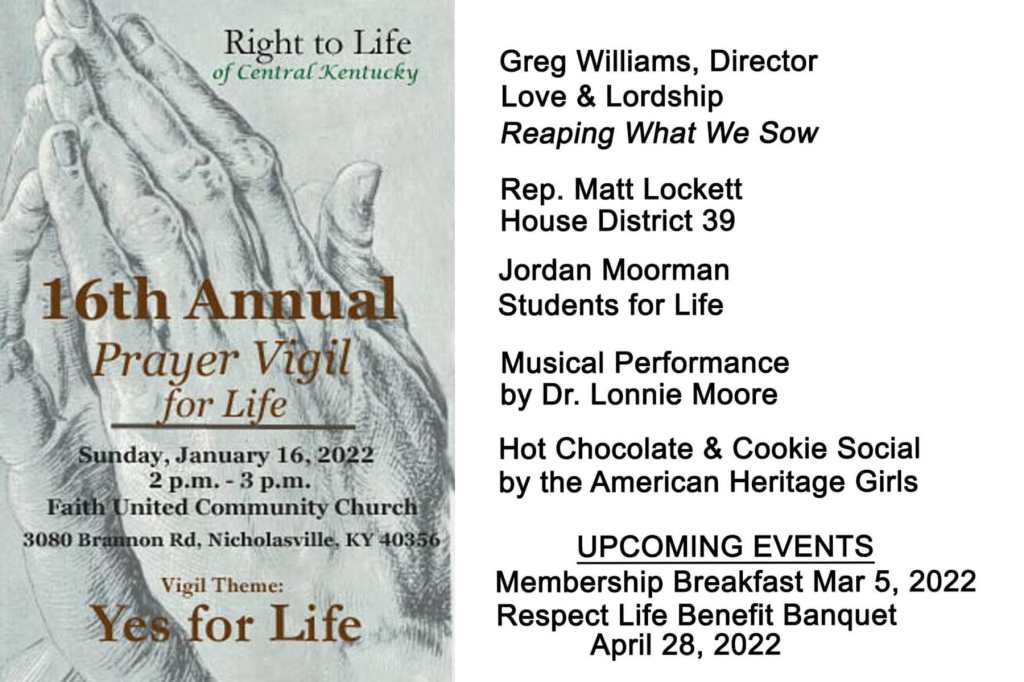 NICHOLASVILLE — Right to Life of Central Kentucky will host the 16 th annual Prayer Vigil for Life on Sunday, Jan. 16 at Faith United Community Church, in the church gymnasium.

Faith United is located at 3080 Brannon Road in Nicholasville, near the Cracker Barrel. The time for the event is 2 pm – 3 pm. The event is open to the public.

Greg Williams, the President/CEO of Love & Lordship ministry, will be the principal speaker. He holds degrees from Transylvania University, University of Kentucky and Georgetown College. In 2016, he was inducted into the Transylvania University Athletic/Basketball Hall of Fame. He hosted a local Character education cable show entitled Character Matters (2003 – 2018) for Fayette County Public Schools Educational Television. He and his wife, Ami, co-hosted Marriage Unleashed, a guest talk show focused on healthy marriages on WTVQ Channel 36. Williams e is co-author with his wife of the recent book, The Authority of Love, which has been called “a wake-up call for the modern-day American church.”

Many Americans will mark the somber anniversaries of both the Roe vs. Wade and Doe vs. Bolton Supreme Court decisions by attending the annual March for Life in Washington, DC, this year on January 21.

The prayer vigil will honor the sanctity of all human life from the womb to the tomb. It provides an opportunity for Pro-life people who can’t attend the national march to gather locally to pray for an end to abortion and to pray for our country.

Forty-nine years of legalized abortion in America has resulted in a staggering loss of life for 64 million babies. In Kentucky, the lives of over 4,000 babies were ended last year at the two abortion facilities in Louisville, EMW Women’s Center and Planned Parenthood.

Former abortionist and founder of the National Abortion Rights Action League (NARAL), Dr. Bernard Nathanson, M.D., said, after his religious conversion, in a charge to the clergy of the nation, “If you had been united purposeful, and strong, we (the abortionists) could never have gotten away with what we did.”

In Nathanson’s book, Aborting America, the doctor recounted how abortion advocates like him at the time, had intentionally lied to the public about the facts and figures surrounding “back alley” abortions in order to pressure lawmakers, media and the courts, to legalize abortion on demand.

The sponsor of the vigil is a local chapter of Kentucky Right to Life. Right to Life of Central Kentucky was incorporated in 1972 as a nonsectarian, non-profit organization, which receives no government funding. The mission of Right to Life is to restore legal protections to human beings whose lives are threatened by abortion, infanticide, involuntary euthanasia andphysician-assisted suicide.

Immediately following the vigil, the American Heritage Girls will host a Hot Chocolate and Cookie Social for everyone attending. For questions, please call Diana Maldonado at 859-797-1934.