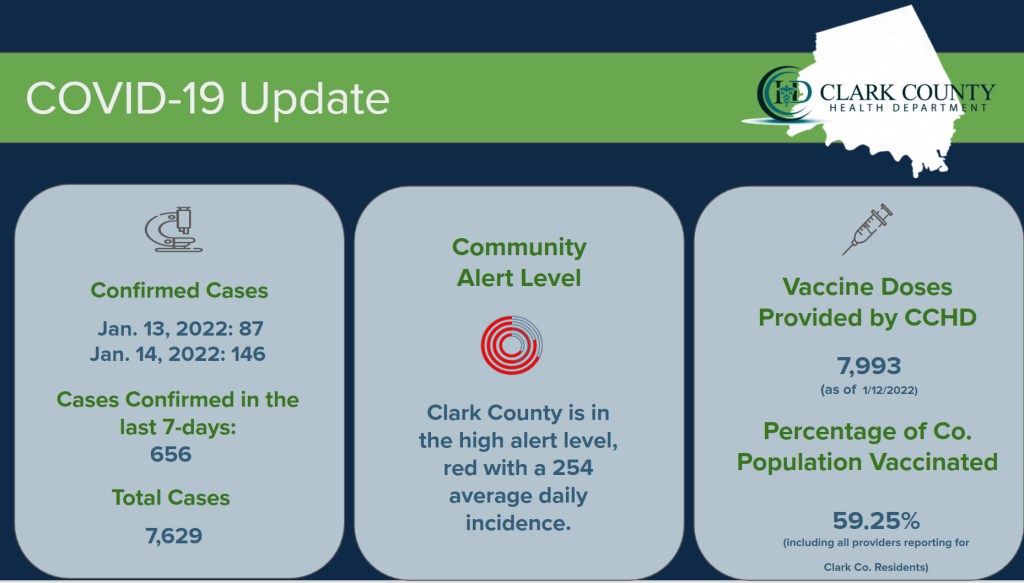 The number of COVID-19 cases in Clark County continues to spike as the ongoing national surge that is currently being fueled by the highly transmissible omicron variant.

The Clark County Health Department is seeing its highest average of daily cases since the pandemic began in March 2020.

“Our daily average now is over 100 cases a day. So for us, that is the first time in the pandemic that we have run a daily average above 100,” Director of Public Health Becky Kissick said in an interview last Wednesday.

Friday smashed the record for confirmed cases with 146, eclipsing the previous mark of 76 set on Sept. 10, 2021, during the height of the delta surge.
Halfway through the month, January has already seen over 1,183 positive cases, the most ever for Clark County. The only other time the county had over 1,000 confirmed cases was last September.

The health department staff confirmed 586 cases by mid-week, which had climbed to 656 by Friday, and that number might have been higher if not for another first.

“Clark County Health Department’s COVID-19 numbers are incomplete this week … This is the first backlog of cases we have experienced since the pandemic began,” Kissick wrote in an email.

This current surge is also the first instance of evident community spread.

Kissick said that the vast majority of cases continue to come from the unvaccinated population and that the number of breakthrough cases remains steady at around 25 percent.

While some health experts estimate that the current wave is hitting its peak, Kissick said that while she remains hopeful that is the case that it is “a little early to make that judgment call.”

The health department has expanded its testing capacity by partnering with Wild Health. Appointments are available at its 273 Shoppers Drive location from 2:30 to 6 p.m.

So far, the site has seen plenty of patients.

“I will tell you that we have had most days where those appointments have filled up, and so we know there is definitely a demand for testing out there, and we’ve seen a really great response from this community for that testing site,” Kissick said.
Anyone in need of a test can register at www.wildhealthtesting.com/ClarkCounty.

Clark Regional Medical Center has seen an increase in patients due to the omicron surge.

“We are experiencing extremely high patient volumes in the emergency department at Clark Regional Medical Center and a definite increase in COVID-positive patients across the hospital. We are also seeing increased COVID cases in our outpatient clinics,” said Emily McCarthy, the director for marketing & communications for the hospital’s parent company, Lifepointe Health.

The number of positive tests among staff has also increased, causing staff shortages.

So far, the surge has not caused any change in some hospital services, but that could change.

“The situation is being monitored daily, and changes in outpatient services and elective procedures that we offer could change quickly,” McCarthy said.

There has been a change in the hospital’s monoclonal antibody treatments policy. It is no longer accepting walk-in appointments due to limited supplies. Interested parties should call 833-234-4050 to schedule an appointment.