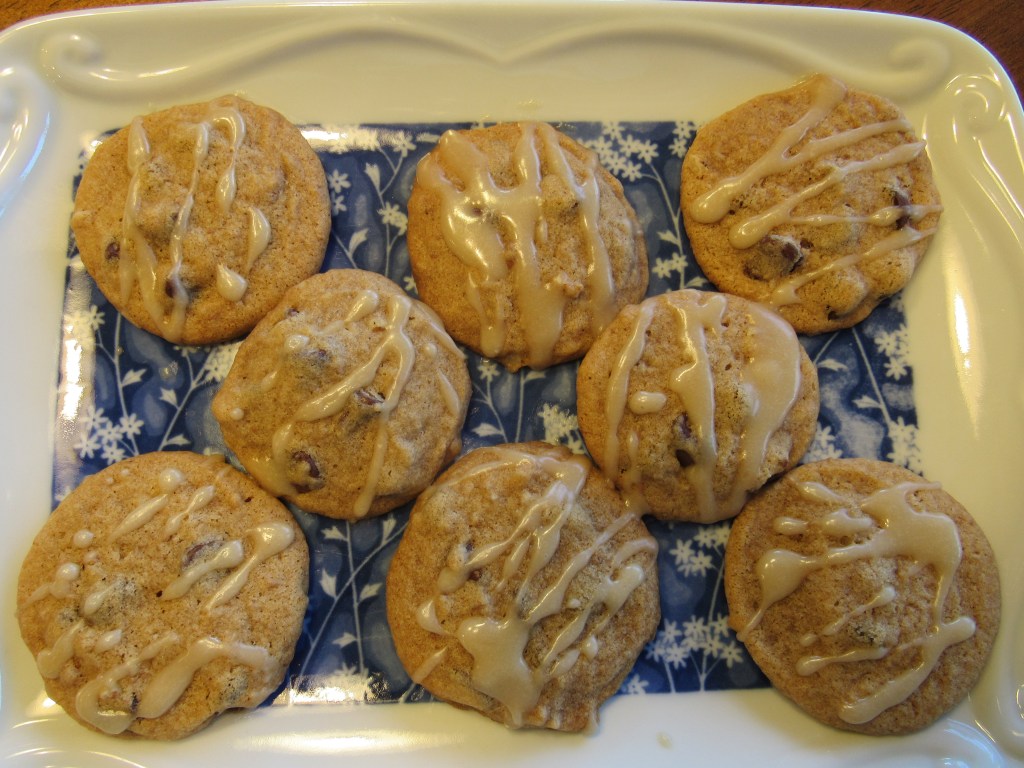 Remove from the heat and transfer to a heatproof bowl.

Stick in the freezer to chill, 10-15 minutes, but no longer.

In a large mixing bowl, beat together the remaining 1/2 stick butter, the cooled browned butter, and the brown sugar until combined. Beat in the maple syrup, apple butter, egg, and vanilla, beating until
creamy. Add the flour, baking soda, cinnamon, and salt. Fold in chocolate chips and pecans.

Transfer to the oven and bake for 8 minutes. Remove the pan from the oven and tap the baking sheet on the counter 2 times to flatten them down.

Meanwhile, make the glaze. Melt together the butter and maple syrup in a small pot over medium heat. Remove from the heat and whisk in the powdered sugar, and a pinch of salt.

Eat warm (highly recommended), or let cool and store in an airtight container for up to 4 days.

Brad and I were going to see our grandson Owen and were taking supper to share with his parents, Sarah and Michael. For dessert I prepared Brown Butter Chewy Maple Brown Sugar Cookies (I’d found the recipe at halfbakedharvest.com). I love a soft, chewy cookie and this recipe sounded like it
would be the perfect end to our meal; and I could leave the rest of the cookies for Michael and Sarah to enjoy.

Mid-morning, I browned the butter and set it in the freezer to cool while I preheated the oven and lined two baking sheets with parchment paper. Browned butter is so tasty; it adds a nuttiness to dishes, which, along with the maple syrup, would make these cookies a hit I used my hand-held mixer to combine the softened butter, the browned butter and brown sugar.

Once combined I added the maple syrup, homemade apple butter, egg and vanilla and beat with the mixer until creamy. In a small bowl I combined the flour, baking soda, cinnamon and salt and then gradually added these dry ingredients to the wet ingredients until thoroughly mixed then folded in the chocolate chips and finely chopped pecans.

While the second batch of cookies baked I put the glaze together, which was done in a snap. I used 3/4 cup of powdered sugar for my glaze. I drizzled the glaze over the cooled cookies and then it was time to get the second batch out of the oven. When I was getting to the end of the dough there were no chocolate chips in it and that was fine with me since I don’t like chocolate and I really wanted to try these cookies.

I repeated the process of tapping on the counter and baking a couple more minutes and once the cookies were cooled I glazed them. I decided to leave a few of the cookies unglazed just to see what they tasted like, and I sprinkled a few of the glazed cookies with flaky black sea salt. We headed to Lexington and once we were finished eating supper we dove into the cookies.

While we were munching on the cookies Michael mentioned that his dad, Bob, really likes maple so I suggested they share with him and give me his thoughts. They did just that and Michael’s dad loved the cookies.

So now I had to decide was this recipe a Nailed It or a Failed It. I guess it’s really up to your taste buds. For my taste, they were a failed it because they just weren’t that great. Sarah and Michael said it was a toss-up, but Bob, Michael’s dad, said he thought it was a Nailed It. If you like the taste of maple and chocolate you might agree with Bob and these could be a winner for you. I however, won’t be saving this recipe for future use.