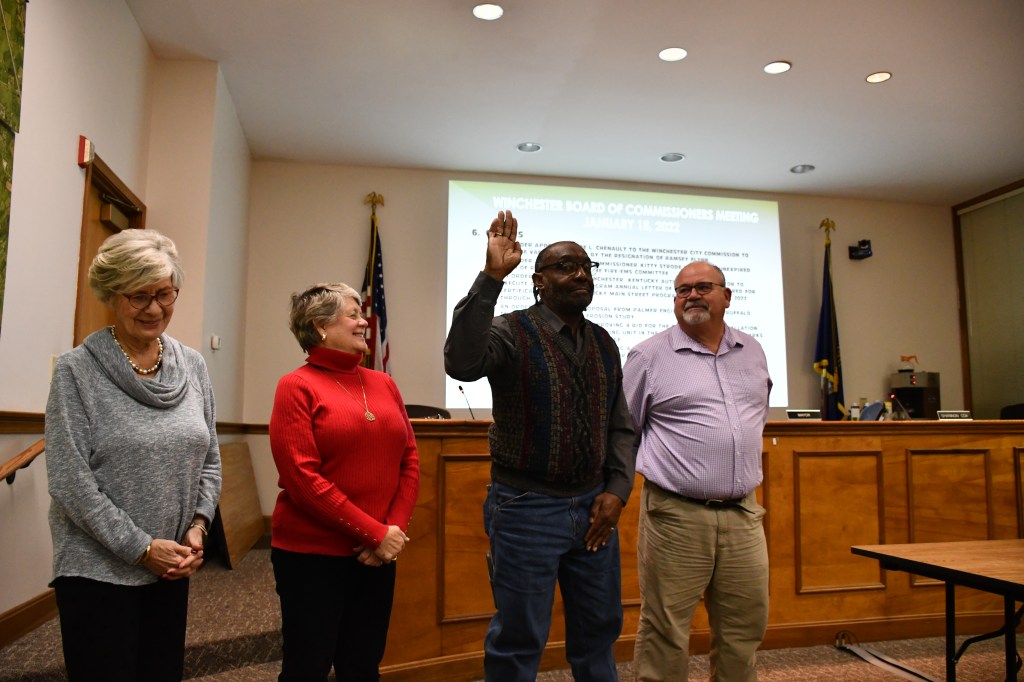 The board of commissioners unanimously voted to appoint Joe Chenault to fill the seat vacated by Ramsey Flynn after his resignation on December 31, 2021.

The 66-year-old Chenault was born in Winchester and has lived in the community his entire life. He is retired from East Kentucky Power Cooperative and works part-time for the Clark County Sheriff’s Office as a bailiff. The new commissioner also coaches 6th and 7th Grade basketball at Campbell Junior High School and owns Joe’s Detail Shop.

In addition, Chenault is the Winchester Urban Renewal Board chairman and has served on it for the past 15 years.

Chenault did not expect to be asked to serve when he was offered the appointment after Flynn’s resignation became official.

“I was kind of surprised,” he said, but he had no hesitation about taking the position. “I was approached about it like I said, I thought about it, and I called the mayor back and said I would accept the chair.”
Chenault said he decided to take the appointment because he was already involved in the community and was ready to become even more so as a commissioner.

He has ideas on issues and projects he would like to see the commission take action on but is focused primarily on learning the ins and outs of his new position.

Chenault had this to say to the residents of Winchester: “They can know that they can reach out to me for anything and call me anytime they like to … My number and name is open to the public.”

His appointment will retroactively begin on Jan. 1, and he will serve for one year until he is reelected or his successor takes office on January 1, 2023.

Chenault is not sure if he will seek a full term, but one thing he is sure of is his love for his hometown.

“It’s quiet, and it’s not a violent city,” Chenault said when asked about what he loves about Winchester. “You can walk the streets and feel safe and go where you want to go.”

Several of Chenault’s fellow board members were quick to offer their praise and congratulations to their newest colleague.

“I have known Joe Chenault for many years. He cares about our community and has always been actively involved. Joe was the perfect choice to finish out Commissioner Flynn’s term. I look forward to working with him the next eleven months,” said Commissioner JoEllen Reed.

“I am pleased to have Joe join us as a city commissioner. Joe’sJoe’s involvement in this community makes him an excellent choice. He brings experience, dedication, and a lové for our city. Welcome Joe, and I look forward to working with you this year,” she said.

Commissioner Shannon Cox has worked with Chenault before.

“Joe and I have been friends for many years. We have coached together and even umpired a lot of baseball games together. I consider him and his wife Cleo good friends,” he said. “I am excited he accepted our invitation to serve on the commission. He makes thoughtful decisions and doesn’t rush into things. I know he will be a valuable addition to the commission and will serve the community well.”