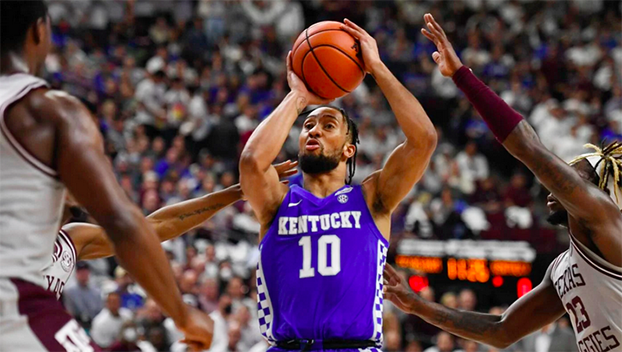 Kentucky stayed together when it mattered the most.

The No. 12 Wildcats overcame a 13-point deficit and escaped with a 64-58 win at Texas A&M Wednesday night, handing the Aggies their first Southeastern Conference loss of the season. Kentucky missed its last six field goals, but made four of its last six free throws, including one by Davion Mintz with 10 seconds remaining to give the Wildcats a necessary cushion to fend off the hosts.

After Kentucky secured its fourth straight victory, forward Jacob Toppin said the players emphasized staying together in the locker room following the contest.

“We definitely played a lot better in the last four minutes,” he said. “Coach (John Calipari) has emphasized in the last four minutes, if we’re in a close-game situation, how are we going to finish. I think we did a pretty well job of finishing the game. We still have some things we need to work on, but it’s just a part of basketball. We’re going to go back to the drawing board, see what we need to fix and get better at it.”

Calipari had been working on late-game situations for his squad, but said the Aggies forced him to go with the flow, especially in the closing minutes.

“We’ve been talking a lot about the last four minutes of games,” Calipari said. “We’ve been working on how we finish. This game was different. Some of the stuff we wanted to do to finish, we could not do because of how they played and it ended up being an isolation game and, now, guys had to go make plays. We have the players who can and did.”

Mintz made a clutch 3-pointer and TyTy Washington drained back-to-back jumpers that enabled the Wildcats to keep a slim lead before going into game-saver mode in the closing minutes, Texas A&M didn’t do itself any favors and missed tits last four shots, while failing to score in the last 2:48 of the game. The Aggies were 1-of-22 from 3-point range and 5 of 13 on free throws.

“In a close game like this, the environment was crazy (and) for us to stay together when they went on their runs, it’s big, big-time, and it just shows the group that we are,” Toppin said. “Not only are we cool with each other off the court, but on the court. We’re not going to fight about anything, we’re going to get on each others behinds, but that’s about it. But it’s all love and we’re going to continue to stay together and work hard, so we can get wins like this.”

Mintz agreed, adding the Wildcats (15-3, 5-1) were caught off-guard by Texas A&M’s intensity from start to finish.

“They came out, played well and dislodged us early with choppy ball screens and they were more aggressive than we thought they were going to be,” he said. “They were really aggressive and had us out of rhythm in the second half. I’m just super proud of this team coming out of here with a win. Regardless how ugly that was tonight, we won and that’s all that matters.”

In his second game back from a strained neck, Sahvir Wheeler led the Cats with 12 points and dished out four assists, Mintz followed Wheeler with 10 points and eight rebounds. Oscar Tshiebwe just missed double figures with eight points and 14 rebounds.

As a team, the Wildcats shot just 36 percent and missed its first nine 3-pointers before Wheeler drained a trey with five minutes remaining in the first half. Kentucky also committed 17 turnovers and made just 4-of-18 3-pointers.

Despite the struggles, Calipari didn’t mind a close game to follow up his team’s impressive 107-79 route of Tennessee last Saturday in Lexington.

“I love those games,” Calipari said. “I just absolutely love them … that knows you had to fight and had to guard and you had to rebound or you have no chance of winning. They were good and I understand they missed some shots that they normally make.”