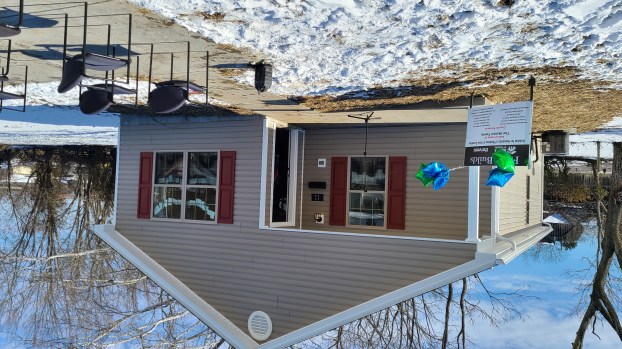 The Skinner house is one of several Habitat for Humanity homes that will go on Lincoln Street in the coming years. (Photo by Warren Taylor)

Jamie Skinner filled out the application for Habitat for Humanity several times in the past but never submitted it because the time never felt right.

Fast forward a few years later to a chilly Saturday afternoon, and she was holding the keys to her new home on Lincoln Avenue in Winchester; the house a product of a partnership between several local churches and the Lexington branch of Thrivent Financial, and yes, it was built under Habitat for Humanity of Madison and Clark Counties’ umbrella.

A lot had changed for Skinner and her daughter, Trenity.

“We were living in a duplex, and our finances ended up getting a little bit too much to where we couldn’t handle it,” Skinner said following her home’s dedication. “So in November 2019, I decided to pack up and move back home with my dad to pay off some of my debt.”
Skinner, a Winchester native, is an administrative assistant at Transylvania University and at that point was working a second job but felt like “we weren’t getting anywhere.”

When they moved, the Skinners had to adjust to a new reality: sharing a bedroom.

“We like our privacy, so it has been a little challenging,” Skinner said. “We have learned to communicate. That is positive, but that’s probably the only positive. We were in need of our own space.”

Skinner submitted her application to Habitat in September 2019 and got a call back for an interview to see if she qualified. She said she felt “blessed” at that moment and that God “knew it was my time.”

So what had kept Skinner from turning in prior applications she had filled out?

So, with her debt paid, Skinner made the leap, and Habitat decided she was a perfect candidate for one of their homes.
Before she could close on her home, Skinner had to complete at least 300 hours of “sweat equity” with Habitat. She spent time volunteering on building sites and in Habitat’s ReStore.

“If you are dedicated, it’s not a hard process,” Skinner said, who often came out to work on Saturdays to get her hours in, and in the process, she learned something vital. “The most important thing I learned is giving back to people and helping people. It’s a good feeling when you can help someone in need.”

And as she volunteered, Skinner got to see her own home take shape.

“It was pretty amazing to see how quickly my house came up,” Skinner said. “From week to week, it would be different, the foundation would go up, and then it would be a couple of days, and nothing would happen, then you would come back, and then you would see that the walls had come up.”

With the house complete, the only thing that Skinner has left to do is fill out the closing paperwork, which she said she expected to do early this week. Then Skinner and Trenity will move into their new home, and there is one thing they are looking forward to doing.

“Coming home from work and school, cooking and sitting down at the table and talking. It’s what we do now at my dad’s, but we will be doing it in our own house,” Skinner said.”

Faith Builds
The coalition that sponsored the building of the Skinner’s called it “Faith Builds”.

Thrivent Financial donated $45,000 to the project.

“Thrivent got involved in this specific build as part of our initiative in 2021 to help build two homes here in Madison and Clark county,” said Rachel Hooker, a Thrivent financial adviser.

The company has helped sponsor close to 100 builds in central Kentucky over the last ten years.

The 12 local churches involved in the partnership provided financial support, meals and prayers.

Members of the congregations were also able to inscribe messages of support on 2x4s that were used to build the Skinner home.

“We were able to have congregation members sign the boards and put a scripture verse or a word of encouragement on them, “ said Mike McCormick, the lead pastor of Calvary Christian Church.

Dr. Jerry Johns, the reverend at First Christian Church, was thankful to see all the churches come together to support the home.

“I am grateful anytime we can come together to provide housing for somebody that is in need. The Winchester churches have a long history of serving the community together,” he said.