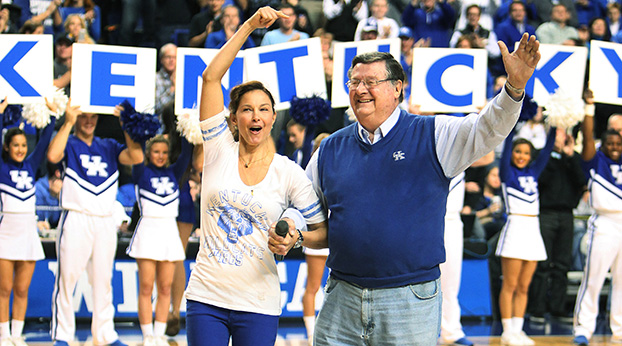 Roger Harden can still remember listening to Kentucky coach Joe Hall telling him and his teammates how he grew up idolizing UK basketball and even had a scrapbook of the Fiddling Five, UK’s 1958 national championship team.

“Because of him, we understood it was a great thing to be a role model for younger fans but to also represent everybody in the state of Kentucky,” said Harden, a point guard recruited out of Indiana by Hall.

“He did so many wonderful things for the basketball program,” Harden said. “I was his last point guard (before he retired in 1985). Every year he would talk to us about how we wanted to be with our fans and how we needed to represent them because that was important to him.

“Every year we would all fan out across the state and talk about the importance of education, not using drugs, and respecting your teachers to kids. Coach Hall wanted us to have an impact in people’s lives and create moments with fans in towns of all sizes and with youth groups, civic groups, or really anybody who wanted us to talk.”

Hall recently passed away at age 93. He won 297 games at UK and the 1978 national title. He also got two more teams to the Final Four.

Harden, like other players, may not have always seen eye-to-eye with Hall during his playing career. However, like so many players, Harden grew to love Hall more every year. He could not visit with him as much recently due to COVID but still reached out to his former coach by phone.

“I really think he was ready to leave. He was such an optimistic person and had so many great relationships with people,” Harden said. “I was certainly sad when I heard of his passing but at the same time I celebrate my relationship with him and the left he gave to BBN along with the opportunity of a lifetime he gave me back in 1982 to be a Wildcat.”

Harden still marvels at how Hall wanted UK players to interact with fans compared to restrictions on athletes today. The former point guard still remembers signing basketballs for any fan that requested autographs.

“Every year we would sign at least 10,000 basketballs. Think about that. We signed 10,000 every year for free,” Harden said. “Every day after practice we would spend at least a half hour passing balls down the row and every player would sign every ball and so would every coach to make sure fans could have those autographed balls.

“The commitment he had to UK fans was something no other coach has had. Being from Kentucky, he was very proud of UK basketball and thought the sun would rise, shine and fall every day on the great state of Kentucky. No matter where we were or what we were doing, if we were asked to sign an autograph he wanted us to do it.”

Harden said Hall always had the same goals for the team: Do not lose in Rupp Arena, do not lose to Louisville, win the SEC regular-season championship and SEC Tournament, never lose to a lower seed in the NCAA Tournament and win a national championship.

Hall’s rules never changed, either. Players had to attend class and a student-advisor checked attendance. If a player missed class, Harden said there would be a knock on the door at 5 a.m. the next day for a morning workout.

Players had to be clean-shaven and wear a coat and tie on road trips because Harden said he worried about the image of the Kentucky program.

There also were no restrictions on how long or when a team could practice.

“There were several nights when we did not play well and coach Hall would tell us not to get dressed (after the game in Rupp Arena). We would put on sweats and go back to Memorial (Coliseum) and practice, especially if he did not like our effort level in the game,” Harden said. “He just taught us that there was a whole lot that went into being a Kentucky Wildcat and he was very conscientious about being the keeper of the flame for UK basketball.”

Hall’s commitment to his players didn’t stop when their UK careers ended. Harden said Hall came to weddings and would be there when players’ children were born.

“Years ago I talked to him about a matter. A half hour after I hung up he called me back and shared more thoughts. Two hours later, he called again,” Harden said. “If coach Hall knew there was a job opportunity you were interested in, especially in the state, he was there to help and that was quite a help with all the connections he had. He was always glad to make a call to help your livelihood.

“He said that is what his commitment would be when he signed all of us. Nobody can ever say that Joe Hall did not keep his word in any relationship he had.”