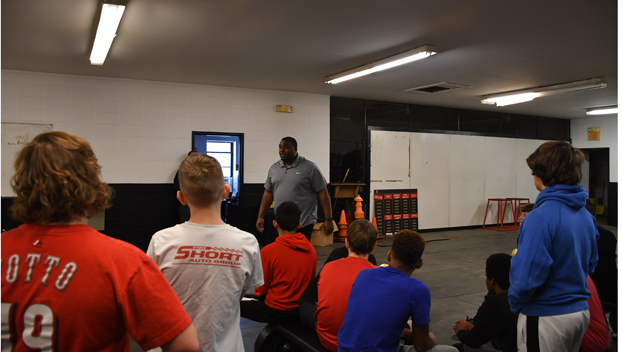 Tristan Jones was a three-sport star as a George Rogers Clark Cardinal, and now he has a chance to add to that legacy as a coach.

Jones was recently named the head coach of the Campbell Junior High School football program and met his players for the first time on Monday.

“I thought it would be a great opportunity for my career as a coach,” Jones said about his initial thought when GRC head football coach Joe Chirico and Campbell principal Dustin Howard approached him about taking the job.

This is not Jones’s first foray into coaching. He served under former coach Lucas Oliver and Chirico as a defensive line and outside linebackers coach from 2018-21.

Being a head coach is a different animal, though.

“Responsibility,” Jones said about the differences. “All the backtalk stuff you have to worry about, physicals, making sure they actually know the equipment, making sure they are all up to date and tested, and just kind of getting kids out with in-school recruiting.”

Another responsibility of the job is making sure that players stay in the program and developing them into sound players for when they make the jump to high school.

“It’s a big step going from middle school to high school. Everybody hits a big growth spurt; everybody gets a little bit faster; everybody gets bigger,” Jones said. “If I can teach them to be technically sound, then you know if they are an early bloomer and sag off going into the high school, they won’t be as far behind with their high school careers.”

Jones is taking over a program with a lot of talent, especially this year’s 7th-grade team that finished as the state runner-up in its division.

“These kids have been playing together for a while, and they just meshed. They run a great system, and they had great coaches,” Jones said.

So what can parents expect from Jones as head coach?

A Championship Past
Jones was a decorated athlete during his prep years.

He was a member of the 2006 GRC football team that advanced to the regional finals and the 2007 basketball team that went to the quarterfinals of the Sweet 16. He won the 2007 Kentucky Class AAA state championship in the shot put.

His efforts on the gridiron earned him a scholarship to Western Kentucky University, where he played as a tight end from 2008-11.

“At first, it was rough. My class was the first Division I class they had recruited,” Jones said about his experience as a Hilltopper. “We got better and better guys in, went to a couple of bowl games, and went in and beat Kentucky two years in a row.”

Jones graduated from WKU in 2012 with a degree in interdisciplinary studies and then enlisted in the United States Army.

“I was active duty for six years and was stationed at Fort Drum in upstate New York,” he said.

During his time in the military, Jones was in a supply unit.

“Anything that anybody touched had to go through me first. It was a pretty good little gig,” he said.

After being discharged, Jones went back to school and earned a degree in kinesiology and health promotion from the University of Kentucky in 2020.

He is currently pursuing a master’s degree in health and physical education at the University of the Cumberlands.

Jones and his wife, Jessica, have two sons, Tate and Jasai. The couple has a little girl, to be named Luna, on the way.