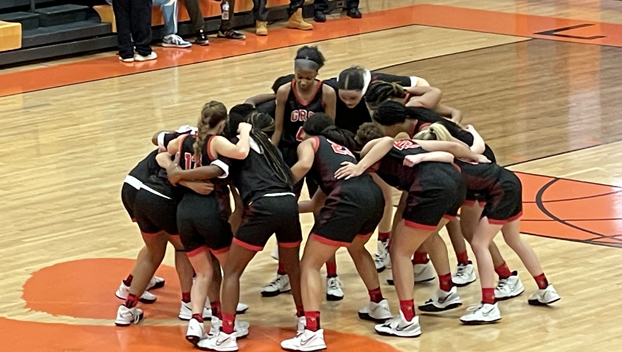 As Humphrey Bogart said to Ingrid Bergman in the immortal movie classic "Casablanca" -- "We'll always have Paris." Maybe about different circumstances, but the Lady Cards have memories of Paris too -- 51-24 on-the-road victory over the Lady Hounds. Cards' Brianna Byars led the team with 15 points, including 11 in the second half, while Asja Garrard also had 9 points, while Flowers and Ciara Byars tied with 6 rebounds each.(Photo by Matt Cizek)

The Paris Lady Hounds had a lot to gain by potentially defeating the George Rogers Clark Lady Cards on Friday night, who were responsible for their lone loss in the last 10 games. However, behind a stifling defense by the Lady Cards, it wasn’t to be.

It improved their record to 17-1 on the season, and kept them undefeated in both the 10th Region and 40th District play.

“Our goal every year is to get the #1 seed in the regular season and District,” Coach Robbie Graham said. “Tonight went a long way toward that. It puts us in at least a tie. One more win would put us over the top.”

Both teams struggled to gain some offensive ground early on.

However, the Cards were helped out by three-point shooting. Six made shots from behind the three point-line in the first half, including four by 7 th grader Kennedy Stamper, accounted for 18 of their 27 first half points.

“Ball movement was the biggest thing,” Graham said. “We were doing a good job of setting screens, and getting open looks.”

Defensively, the Cards limited the Lady Hounds to only one first-half three-point basket, and 13 points overall before halftime.

Although some adversity came their way when defensive stalwart Tyra Flowers was called for two fouls within the first four minutes of game time, the

Lady Cards were able to hold the Lady Hounds scoreless during a 12-0 stretch.

“We’ve got to learn to play through that, when we’ve got two fouls,” Graham said. “We just dug in defensively. We settled down and guarded, and were able to get some easy baskets.”

In their prior matchup in Winchester, the Lady Hounds were able to come out strong in the third quarter and hold the Lady Cards to just six points.

However, as they came out of halftime holding a 14-point advantage, the Lady Cards were determined to change fortunes – motivated by some aggressive play just as the second quarter ended.

“We always talk about the first few minutes of the third quarter being very important,” Graham said. “The game got a little chippy there at the end of the first half, and I think it fired our girls up. We came out ready to go.”

The Lady Cards outscored the Lady Hounds in the third quarter, and finished big in the fourth quarter en route to a convincing 27-point margin of victory.

Statistically, Brianna Byars led the team with 15 points, including 11 in the second half. Asja Garrard also had 9 points, while Flowers and Ciara Byars tied with 6 rebounds each.

In total, the Lady Cards had seven different scorers in a game that saw multiple players see action.