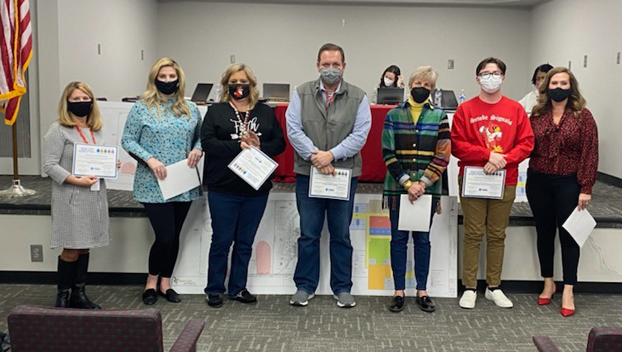 The Clark County Public Schools Board of Education approved a schematic design for the district’s new preschool Tuesday.

The plans are for a 42,466 square foot, 18 classroom facility to accommodate 350 students with space left over to expand the building should enrollment increase.

To maximize the most efficient use of space, classrooms will be paired together to share toilet and storage spaces. Each wing would have six classrooms, meaning there would be three shared facilities. There would also be a community space in each wing for extended learning.

The school would have a shared cafeteria and gym space, but plans are for students to eat in their classrooms in a family-style setting.

RossTarrant Architects of Lexington is designing the building.

The board voted to include a new preschool as part of a construction plan in Oct. 2020 that also included a new facility for the Phoenix Academy.

It approved the BG-1, which notified the Kentucky Board of Education that the district intended to build the school in March of 2021 and chose to build the new preschool on 12 acres of land located behind Strode Station Elementary School in May.

The state board of education approved the BG-1, and the total project cost is an estimated $13.6 million.
School Board Recognition

January is School Board Recognition Month across the United States, and Superintendent Molly McComas recognized each of the five local board of education members.

“This stuff would not happen if it weren’t for having dedicated public servants that don’t get enough and take a whole lot in order to serve our community,” McComas said about those who serve on school boards. “A large part of that service to the community is through serving your school district as a board of education member.”

Each board member received a bag of goodies, a certificate of thanks and a short tribute from the superintendent.