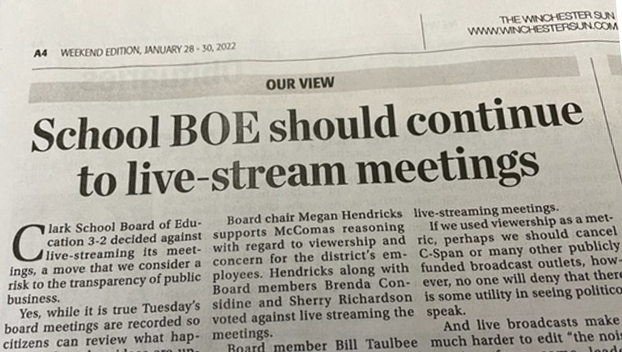 Clark School Board of Education 3-2 decided against live-streaming its meetings, a move that we consider a risk to the transparency of public business.

Yes, while it is true Tuesday’s board meetings are recorded so citizens can review what happened when the videos are uploaded on Fridays the week these meetings occur, what is the harm of broadcasting these meetings live?

Superintendent Molly McComas said she decided to end the live-streaming in November because of low viewership numbers and because she shares a concern for the district’s tech employees who spend time away from their families to record these multi-hour meetings.

“When you have a technology person in the back who is trying to do a live stream, trying to also video and then is going to have to record, have it put up that night, and board meetings aren’t ending until 10 o’clock, people just want to get home to their families,” she said.

Board chair Megan Hendricks supports McComas reasoning with regard to viewership and concern for the district’s employees. Hendricks along with Board members Brenda Considine and Sherry Richardson voted against live streaming the meetings.

Board member Bill Taulbee said live-streaming all meetings would provide more transparency due to the ongoing scrutiny that boards are facing across the country. Board member Ashely Ritchie joined Taulbee in supporting the motion.

Remember when the BOE voted to issue a 30-day termination notice to Winchester law firm Grant, Rose & Pumphrey during a contentious special-called meeting on Oct. 1.

The board’s 3-0 decision to terminate its business contract with the firm for legal services and to approve one with Mount Sterling firm White, Peck and Carrington was met with controversy. Brian Thomas had represented the board on behalf of Grant, Rose, & Pumphrey, and in February reported the allegations that Board member Sherry Richardson’s family’s overhead door business indirectly benefited from a district project to the Kentucky

Attorney General’s Office, which prompted an ongoing investigation. Investigation concluded that Richardson had done nothing wrong.

Though views from the last two board meetings uploaded a few days later in November were much lower, with 143 and 94 views, respectively, we have to ask, so what?

If we used viewership as a metric, perhaps we should cancel C-Span or many other publicly funded broadcast outlets, however, no one will deny that there is some utility in seeing politicos speak.

And live broadcasts make it much harder to edit “the noise” coming from some leaders’ mouths.

If a major issue faces the school system, people would want to be informed what’s happening without having to wait until the video is uploaded a few days later on a Friday… the beginning of the weekend when folks are less likely to be paying attention. And really, who is going to be waiting breathlessly to watch this “must-see tv” then when it is uploaded to the web?

To be candid, particularly during these pandemic times, some folks may not wish to attend meetings in person so watching what happens at home provides a sense of security.

The Sun very much understands the demands of attending long meetings when politicians seem to drone on and on but say nothing at all. Truly we sympathize with the school district’s tech crew who record these meetings.

However, duty demands discipline, particularly when it is of vital interest to the public to be informed of such matters even no matter whether meetings are routine and voices steady or whether there is a fierce debate.

Live-streaming the meetings provides an extra layer of transparency, so the extra effort is worth it especially in this age of social media madness when rumors and innuendo have a tendency to serve as a substitute for truth.