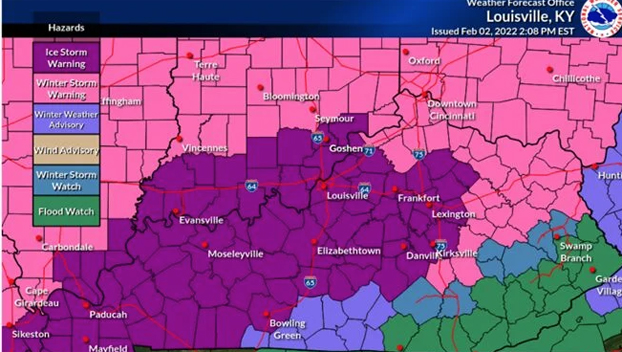 Local news — Clark County parents just got the phone call — Thursday is to be NTI day, meaning no classes.

According to the National Weather Service Office in Louisville, moderate to heavy rainfall is likely into Thursday, when it will change to a wintry mix of freezing rain, sleet and snow.  Forecasters say a significant accumulation of ice, sleet and snow will be possible into Friday morning.  That means power outages and tree damage will be possible due to freezing rain, as well as difficult to impossible travel conditions Thursday into Friday morning.

Even in areas where the snow and ice are not expected to be as severe, especially in part of southern and eastern Kentucky, a flash flood watch has been issued due to the potential for heavy rain, up to 3.5 inches in some locations.

The major winter storm that is bearing down on Kentucky, prompting issuance of ice storm and winter storm warnings in much of the state, has led Gov. Andy Beshear to declare a state of emergency and close state office buildings on Thursday.

“Freezing roadways are extremely dangerous,” Gov. Beshear said.  “I am closing all state office buildings and asking Kentuckians to stay off the roadways if possible, so crews can continue plowing and clearing roads.”

The Transportation Cabinet says highway crews are preparing for significant ice accumulation that will make travel difficult in most of the state well into Friday.  The rain that has been falling will prevent the pre-treating of area highways with salt brine in advance of the approaching winter system.

Crews have spent the week prepping equipment and vehicles for response to the winter weather event, according to the Cabinet.  In some areas, they have been advised to bring food, sleeping bags, and a change of clothes in case they are required to maintain snow and ice-fighting efforts for several days.

Transportation Secretary Jim Gray has signed an official order temporarily suspending some restrictions on motor carriers that will be engaged in restoring power, removing debris and delivering fuel to areas expected to be stricken by an approaching winter storm.

“Our Cabinet is ready to help ensure that needed relief will get quickly to areas that lose electric power and experience damage as a result of flooding and ice,” Gray said.

The order, which is effective through 12:01 a.m. EST on Feb. 15, temporarily relieves commercial drivers from maximum driving times and weigh station stops if providing response to affected areas.

“The approaching storm front is forecast to be one of the most dangerous events in our recent history of record-breaking disasters, due to the possibilities of heavy icing accumulations,” said Michael Dossett, Director of Kentucky Emergency Management.  “Please make every effort to stay off of all local and interstate roadways, as travel will be extremely hazardous and rescue efforts for stranded motorists will severely limit first responder capabilities.”