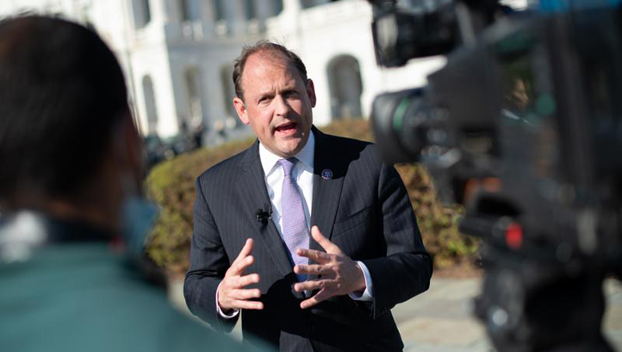 Inflation is at its highest point since the Reagan administration, and many Americans, including those in Clark County, are struggling to keep up with the price surge.

Rep. Andy Barr (R) has taken note of the issue.

“The inflation that we are experiencing is persistent,” the congressman from Kentucky’s 6th Congressional District said. “It’s the fastest pace of inflation since 1982 when the inflation rate was falling. Today inflation is rising.”

Last summer, President Joe Biden said he believed that price increases were “transitory”, something that Federal Reserve Chairman Jerome Powell said in December was not the case.

“It’s pretty clear with the seven straight months of inflation over five percent that inflation cannot be characterized as transitory,” Barr said.

“That is way north of its two percent target. The reality is the Fed is not even close to meeting its price stability mandate,” Barr said.

So why does it matter to the average American?
“If you are a working family in America, your purchasing power is declining,” Barr said. “There was a recent study out of the University of Pennsylvania Wharton School that really captured this inflation crisis. What that study found is that the average US household spent $3,500 more to achieve the same level of consumption of goods and services that it had in previous years. So that disproportionately hurts low-income families.”

The cause of the issue has many sires in Barr’s opinion.

“This is a classic supply and demand mismatch,” he said. “Because of all the overspending in Washington, you have excess demand … We have also constrained the supply of labor because of the overspending. Frankly, what employers will tell you, the employers in central Kentucky they will tell you that they cannot compete with the government because the government has paid people not to work.”

Another is poor monetary policy by the Federal Reserve in the form of record low-interest rates and the purchase of billions of dollars of US Treasury debt and securities.

As the Fed reverses course, Barr said that it will more than likely have to “precipitously raise interest rates.”

Veterans Issues
During his tenure in Congress, Barr has been a vocal advocate for veterans.

Recently he has dedicated himself to helping over 4,400 Kentucky veterans exposed to toxic water in North Carolina over several decades.

“Literally thousands of veterans who live in Kentucky who served at Camp Lejeune, they were exposed to toxic water while there,” Barr said.
Former Marine Brian Amburgey, who lives in Winchester, brought the issue to Barr’s attention.

Barr co-sponsored the Camp Lejeune Justice Act, which would have allowed anyone who served or worked in the area that was exposed to the water to file a court claim. However, the bill stalled in committee.

Last summer, Barr co-sponsored the Toxic Exposure in the American Military Act and thinks it could pass in the next Congress.

The bill would also require training on toxic exposure for VA employees.

Any veterans wanting to have their voices heard by the congressman can join the Sixth District Veterans Coalition at www.barr.house.gov/sixth-district-veterans-coalition-sign-up.