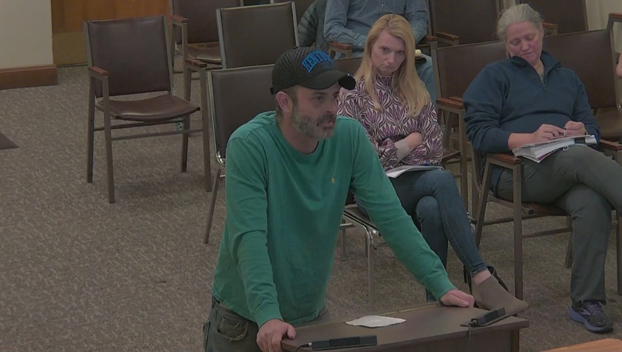 Wes Cartwright appeals to the Winchester Board of Commisisoners during. (Screenshot from meeting live stream)

Winchester businessman Wes Cartwright had some poignant remarks for the Board of Commissioners Tuesday.

Cartwright owns a building on Broadway St. that has been condemned since October when its foundation sustained heavy damage from high floodwater from the Town Branch drainage system.

Since then, Cartwright’s sign business has taken a hit, and he said he has had to pay thousands of dollars in legal fees while his wife works seven days a week to help them make ends meet

Tenants from Cartwright’s upstairs apartments were displaced when the building was condemned.

The board approved a measure at its Jan. 18 meeting that signaled the city’s intent to purchase the building for $225,000 and repair the existing drainage system beneath it.

It chose that option over plans that would have moved the drainage system out from under Cartwright’s building and several neighboring ones. The cost for each project would have been several million dollars.

FEMA turned the city’s request for federal aid last year because the flash flooding event did not affect enough people.

“It doesn’t feel very good. It makes you feel like the federal government doesn’t have your back,” Cartwright said. He said he sadly feels that way about his local government. “I’m not a big enough problem. Right now, the lawyers are trying to figure out how to get out of liability for what’s happened to me.”

Cartwright’s disappointment comes from his fondness for the community.

“In the first meeting we had had after the flood happened down there, I explained how I love my city and that I was born and raised here and don’t want to go anywhere,” he said earlier in the meeting.

He went on to say that what he loves the most is how generous the community is when it comes to charitable giving and that it extends to helping the city out with its responsibilities.

And now he has to sell his building because he believes the city didn’t take care of its responsibilities.

“I don’t want to sell my building. This is something that 40, 50 years of neglect of that system that the city caused. I don’t deserve what happened to me down there,” Cartwright said.

“Well, the reason the city made the offer that we made was to acquire the property and to eventually raze the property, clear the site and fix the storm sewer in place,” he said. “We were provided with a series of options. All of those options were discussed in this room by the engineer with the city commission, and I think you were present for those discussions. We didn’t make it, we didn’t mince words about it from the city’s perspective it was the most cost-effective option for the city.”

Cartwright asked Burtner if that was right since it is affecting his livelihood.

Burtner contended that the “city of Winchester is taking a very responsible position” by trying to fix the problem “in the most cost-effective way possible.”

That was not good enough for Cartwright.

“You’re not taking care of someone who has been in your community,” he said.