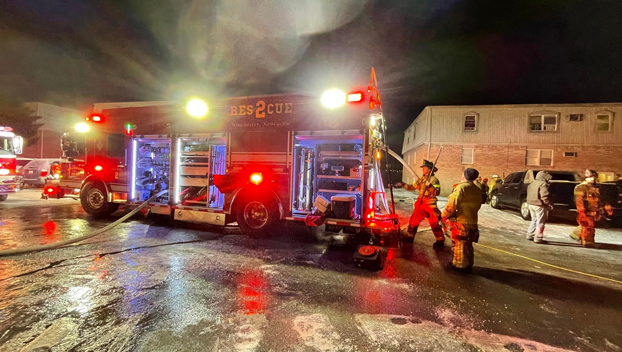 August Fisher, a battalion chief with Winchester Fire Department, said that the crews arrived at the scene of the structure fire at 5:36 a.m. on Oxford Drive and found smoke emanating from the second floor.

The cold weather and ice build-up caused issues for the crews while they fought the fire.

The Winchester Police Department soon arrived on the scene and helped evacuate the building.

“Everybody did get out fine with no injuries,” Fisher said.

The fire started on the first floor and burned up through the wall to the second floor. As a result, two apartments suffered fire damage, but the crews kept it contained to those two residences.

Sadly, the fire displaced one family, but they quickly got a happy ending.

“With the Red Cross’s help … They got them another apartment to move into before we even cleared the scene,” Fisher said.

Crews also rescued a dog from the fire.

Fisher said the cause of the fire is still under investigation.