After The Flood; Winchester Property Owner Evaluates Next Step 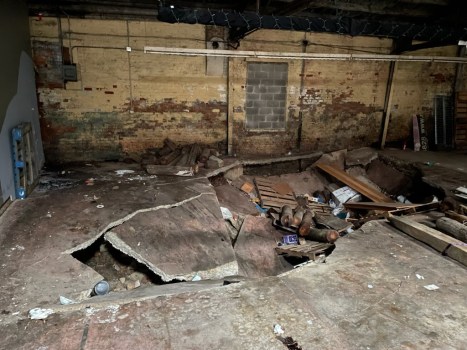 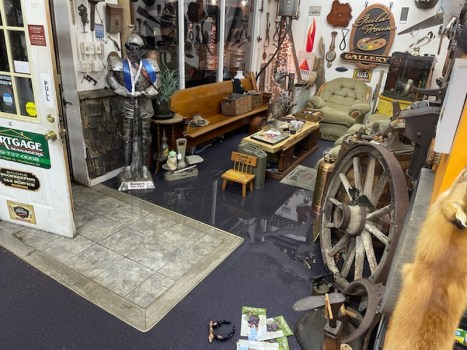 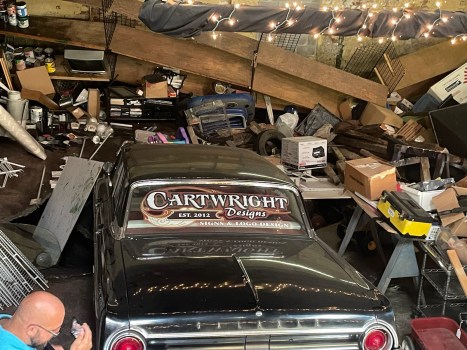 Photo shows the damage to Cartwright's property after the Oct. 7 flood. (Photo submitted by Wes Cartwright)

Winchester will not forget the night of Oct. 7 anytime soon.

A band of rain moved through the area and dumped several inches of precipitation in just a few hours. The deluge caused flash flooding in the downtown area. Several motorists were stranded in the rising waters, but thankfully no one was injured or hurt.

Wes Cartwright, the owner of a building located at 12 E. Broadway St., was alerted by one of his upstairs tenants that water had invaded the bottom floors, which housed his design business.

“About 11 p.m. I went down to my shop, and there was above knee-high water going all through Broadway. It looked like a river. I mean just really fast-paced water,” Cartwright said in an interview with the Sun last year.

The water started to bend Cartwright’s garage door, so he was forced to open it, letting in a surge of floodwater, which did not recede until the early morning hours.

When they did, Cartwright found a hole in his floor. The gap had expanded when he returned later in the day.

At that point, he was forced to call the Winchester Fire Department.

After a thorough inspection involving robots, drones, and a structural engineer from Lexington, the building was condemned.
Cartwright was forced to close his business. His upstairs tenants were forced to find new dwellings.

The hope was that the building could be repaired in a timely manner.

Five months later, no customers are coming and going, and no renters are settling down to dinner with their families.
The building still sits empty.

The city of Winchester plans to purchase the building from Cartwright and then demolish it in the future.
Cartwright does not want to sell but understands that is the only option he has.

Last week, he told the Winchester Board of Commissioners that he feels like he is signing his life away and questioned whether the city was buying his building for safety reasons or to save a few bucks.

And the question can be asked, how did it get to this point?

Public Conversations
City Board of Commissioners heard the initial reports on the damage during its October 19, 2021 meeting, nearly two weeks after the flooding event.

City Manager Mike Flynn said that excess floodwater from the Town Branch Drainage System caused damage to Cartwright’s building and the parking lot behind the Family Dollar on Maple St. He reported that he also met with business owners and residents affected by the flooding.
Flynn offered a blunt assessment of what the city needed to do.

“One of the things is that we are going to have to get Town Branch fixed and probably get it out from underneath a couple of those structures before we can make some more assessments on that,” he said.

Mayor Ed Burtner admitted during the meeting that the drainage system was a problem for the city.

“Town Branch has been a difficult situation for a great many years. 80, 90, `100 years ago, when the town was building out and developing, it was a common thing to build a storm sewer or a culvert, enclose it where the natural flow was and then build a building on top of it. Over time you just have to expect at some point that things are going to go bad,” he said.

Burtner cautioned that any repairs to the drainage systems were “going to cost”.

Representatives from Palmer Engineering presented the board with seven options to repair Town Branch during a special work session on Nov. 2. A handful specifically dealt with Cartwright’s building and moving the drainage system out from under it.

The meeting was the first one Cartwright spoke at and attended. He would only miss one when his building was on the docket.
Cartwright inquired about when his tenants would be able to their personal belongings and if there would be any federal assistance.

The mayor said he was unsure if there would be and reiterated that the drainage system had long been a problem for the city.
“Honestly, Wes, a lot of this damage to the storm sewer has existed for a long time,” Burtner said.

Don Cartwright, Wes’s father, said that when the city took any of the plans under consideration, not to forget the cost, it would take to fix his son’s building.

“What we are dealing with is the public facility part of it. Damages to his business and damages to his building really are going to be more of an insurance issue,” Burtner replied.

The mayor said that the Kentucky League of City’s, with whom Winchester has an insurance policy, would be represented by Covington attorney Jeff Mando.

The city and Cartwright spent the rest of the session discussing different options regarding his business, such as turning the electricity back on so Cartwright could complete projects or moving him into an alternative space.

The board did not vote on a specific course of action, but its members did indicate a preference for getting the drainage system out from under the building.

Stephanie Blain from Palmer presented three such options at the Dec. 7 board meeting.

One plan had the drainage system starting in Church Aly. before it connects with Broadway St. The estimated cost was $985,011.

The second plan would have the drainage system start behind the alley on Highland St. and then connect on Broadway St. The estimated cost would have been $1.4 million.

The third plan would have had the city purchase the building, demolish it and replace the drainage system in its current location. The project would have cost $581,518.

Blain said that Palmer even had an estimate for how much it would cost to repair Cartwright’s building.

“We have estimated the building repairs currently at $215,00,” she said. “A large amount of that is the fill that would be required under the floor slab to stabilize all that.”

Don Cartwright spoke on his son’s behalf at the meeting and asked if the city could do anything to help him out.

Burtner did not specifically rule out any assistance from the city but advised that the ongoing legal discussions about the building needed to play out.

The board did not publicly discuss the matter again until its Jan. 18 meeting when its members voted to approve an order signaling the city’s intent to purchase the building for $225,00 and then demolish it.
Cartwright aired his grievances at the next meeting and questioned the city on its plan of action.

The mayor contended that the city was the most responsible route possible using the most cost-effective plan it was presented.

The Cartwright Perspective
From Cartwright’s point of view, the city had a one-track mindset during the past few months.

“Pretty much the whole time has been coming up with a game plan with Palmer Engineering on how to resolve the problem of the Town Branch.

It has been, pretty much, all about the city’s priorities and what they have to do to resolve that situation and nothing concerning me or my livelihood,” he said.

The experience has not been entirely negative for Cartwright. He said that communication with the city manager has been excellent.

“Michael Flynn has been wonderful. He answers my phone calls, my text messages. I’ve had several questions for him, and he has been more my line of communication than anybody,” Cartwright said.

But he does have concerns about the absence of communication between the city and other downtown business owners.

“The city’s communications with everyone else who was affected that night has been non-existent,” Cartwright said. “It wasn’t just me. It was multiple other businesses and residential houses that were impacted and took losses that night. No one has reached out to them to talk to them about anything.”

The city’s initial public discourse was positive from Cartwright’s perspective since city officials said they knew Town Branch was a problem and that what happened was not Cartwright’s fault.

That changed in the months ahead.

“Then the next meeting, they got coached a little bit, and there were things they couldn’t say,” Cartwright said. “Then it shifted over to closed session meetings, and I had to do everything through my lawyer, contacting their lawyer and insurance companies.”

“I’ll say that the most difficult thing about that whole situation is they are discussing my life, I have no part in it, and then my lawyer is talking to the other lawyers, and I have to send communication through him,” Cartwright said.

This is the first time Cartwright has ever hired legal representation, and he said that the process often has him feeling lost.

“I get advice from all kinds of different people about different things, and I’m just trying to weigh out the situation to do the best that I can for my family.”

Cartwright said that if his building is being torn down for safety reasons, he fully understands the reasoning. He wishes that the city would repair the entire drainage system, though.

“If they go and repair my part, and then they leave it underneath the other buildings downtown, then they are waiting for another thing to happen like what happened to me,” he said. “Those other people who have those buildings, I don’t know if they really understand what is going on underneath their buildings.”

That is a lesson on loss that Cartwright had to learn the hard way.

The Loss
Cartwright worked in and rented space in his building for a few years for his sign design shop. He purchased the property in 2016.

So, he has roots there and, of course, a vested financial interest in it.

“That building was my retirement, and it was my monthly income, and it is gone,” Cartwright said.
He estimated that he was bringing in about $3,500 a month in income from his property.

“If you take my building away from me, that is gone,” Cartwright said. “If I can’t go and replace it, then my rent income and my retirement is gone. I’m going from a place where I had income and security for the future to a place where it is just going to be me, and I’m going to have to work at the sign shop to pay whatever place that I am at.”

The exact financial loss to Cartwright is unknown as he is still documenting the damage done to his property.
Some of it may be irreplaceable.

“My shop downtown is like a museum,” he said. “I’ve got a lot of collectibles and antiques and vintage [Teenage Mutant] Ninja Turtles and all kinds of stuff.”

Cartwright said that he was under the impression that the city would repair his building until about a month ago.

“Up to that point, I was thinking they are going to fix this, and I’m going right back into my building,” he said.

Cartwright knew they intended to buy and demolish his building when the city started talking more and more about safety concerns. So he paid someone to appraise the building. They assessed the property’s worth at around $250,000.

Even with a fairer sales price settlement, Cartwright is not confident he will easily find a replacement property due to the recent spike in real estate prices.

“My problem is if you just Google commercial property in Winchester, go see what you can buy for $225,000. I mean, you can’t get anything … I can’t even find a plot of land so I can build my own building,” Cartwright said.