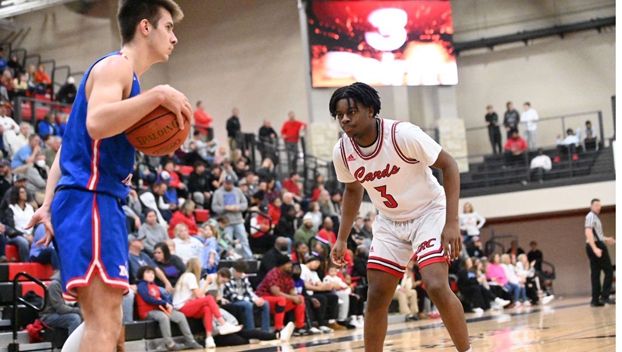 Cards' sophomore Reshaun Hampton has been a key playmaker for the top ranked team this season. After a powerful performance in a close contest against Dunbar High School, Hampton earned the Tim Short Automotive Classic MVP Award. (Submitted photo)

It’s not every day that a sophomore gets playing time at the varsity level, especially when they’re put on a roster that makes up the top-ranked team in an entire state.

Yet for Reshaun Hampton of George Rogers Clark High School’s boys basketball team, that’s precisely the case.
Hampton, a star player from the bench, has helped the Cards on their way to a 23-1 start this season.

“When his mindset is right and he’s playing at the level we need him to play, he’s a really good shooter,” said GRC Coach Josh Cook. “He’s just a special gift for us.”

For the 5’11” sophomore guard, the journey started at a young age.

As the season has worn on, Hampton has seen his fair share of minutes. However, on January 8th against Dunbar,
his light truly shined bright.

In a close contest against Paul Laurence Dunbar, the Cards were clinging to a three-point lead midway through the third quarter. Having recently entered the game, Hampton made an aggressive drive toward the basket, resulting in a foul that led to two made free throws.

After the Bulldogs failed to score on their next two offensive possessions, Hampton took matters into his own hands and put down a pair of three-point shots to give the Cards an 11-point lead. They would eventually go on to a 24-point victory and, for his timely eight points that helped change momentum, he was rewarded with the Tim Short Automotive Classic MVP Award.

“It made me feel good. I felt confident about my shot,” he stated. “Coaches told me to shoot, and I kept shooting. My teammates got me the ball.”

Not to be a one-hit wonder, Hampton took the floor three nights later against Bourbon County, and led the entire team in scoring with 23 points in a 94-46 rout.

This came in large part to making 7 of 8 three-point shots, as the crowd became more energized with every basket.

“He’s arguably one of the better shooters I’ve ever coached” Coach Cook said. “He’s only going to get better and better.”

With two years left to play at GRCHS, a lot of positive expectations await the young guard. Right now, as a key bench player, he’s in an ideal position for seeing his team reach for the top.

“Next year, I see myself starting and being a good point guard,” Hampton stated. “We’ve accomplished a lot. I’m just a spot up shooter, and can get it in and bring a little energy to the team.”