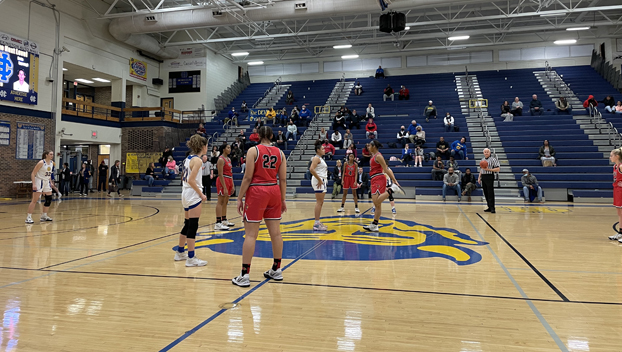 Lady Cards are poised and ready to pounce the Lady Devils before the referee tosses the ball in the air for tip-off. Cards move quick and don’t hesitate to put points on the board for a 65-27 win Tuesday at Henry Clay High School. (Photo by Matt Cizek)

The Lady Cards of George Rogers Clark High School were well aware of the fact that the Henry Clay Blue Devils were entering Tuesday’s contest in Lexington having won 7 of their last 9. As the saying goes, it’s sometimes best to take the crowd out of it early.

“We know that they have their momentum going, and kind’ve wanted to just do what we do best,” said Brianna Byars, who finished as the team’s leading scorer with 23 points.

To start the game, the Lady Cards were able to jump out to an 11-0 lead. Strong defense, paving the way for nearly 30 turnovers in the game, played a large part – as the Blue Devils made mistakes under heavy pressure.

“When we take teams out of their offense, that really affects them mentally,” Coach Robbie Graham said. “Our goal is to make you try to scramble and not let you run your stuff. For a lot of teams, it’s hard to simulate the kind of pressure that we’re going to put on.”

In the second and third quarters, the Blue Devils were able to stay with the Lady Cards in many ways, as George Rogers Clark only outscored them 24-21 during these two periods.

“Good teams with nice players out there, if you give them an opportunity, they’re going to put in the basket,” Graham said. “In the third and fourth we picked it up a little bit defensively, and were able to take care of the ball.”

On the offensive end, Brianna Byars’ 23 points not only made her a top scorer, but also saw her gain new momentum.

“I had to bounce back,” she said. “Mentally, I was not playing like myself [last week], so I knew this game could be my bounce back game.”

Though all games are of interest, this one held something special for senior guard Asja Garrard. While many parents might have been found in the bleachers, Asja’s mother – Ashley Garrard – was serving as Henry Clay’s Coach on the sideline.

“For me, personally, I thought it was just like any other game except she can’t cheer for me,” Asja Garrard said. “My house says defense wins championships and offense wins games, so I had to show up on defense.”

They outscored their opponent 16-1, with only a free-throw taking place with less than a minute left being counted for Henry Clay.

“We got the ball inside, which is definitely a thing we wanted to do,” Graham said. “We want to pass it more, [let] the ball move faster, and get quicker movements.”