Legislation would require athletic participation based on biological sex 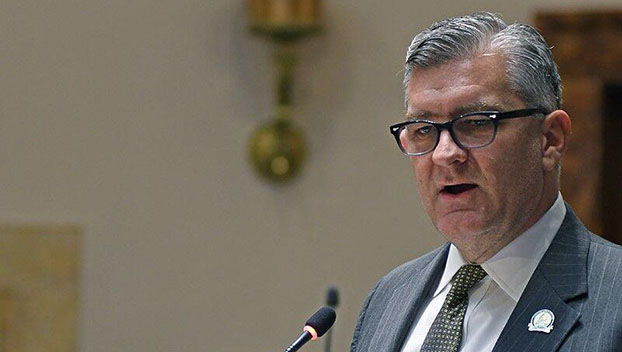 Sen. Robby Mills, R-Henderson, sponsored legislation that requires students K-12 to participate based on biological sex and not the sex they identify with. (LRC photo)

FRANKFORT, Ky. (KT) – Legislation to require students K-12 to play on teams based on their biological sex, and not the sex that they identify with, was approved by the Senate Education Committee on Thursday.

Senate Bill 83, sponsored by Sen. Robby Mills, R-Henderson, would direct the Kentucky High School Athletics Association (KHSAA) to develop administrative regulations or bylaws requiring schools that participate in interscholastic athletics to designate all athletic teams, activities, and sports based upon the biological sex of the students eligible to participate, and prohibit male students from participating in athletic teams, activities, and sports designated as “girls.”

Mills testified that although the KHSAA has a regulation on the subject, “I believe there are flaws in this regulation that could ultimately lead to a female high school athlete competing unfairly with a biological male.”

He said boys have athletic advantages even before puberty in cardiovascular endurance, muscular strength and endurance, speed and agility.

“An Australian study showed that a 9-year-old male was faster on short sprints by 9.8%, and in a mile run by 16.6%,” Mills said.  “Male athletes still have advantages even after testosterone suppression.  Hormone therapy in males after puberty does not substantially eliminate the male athletic advantage.”

David Walls, executive director of the Family Foundation, told the committee, “Women deserve to compete on a level playing field.  Allowing males to compete in women’s sports destroys fair competition in women’s athletic opportunities.  Unfortunately, across the nation, we see more and more instances where males have taken away championships, records, and countless athletic opportunities from female athletes.”

James Craig a member of the Jefferson County Board of Education, testified against the bill.  “We don’t know how many transgender students are in our schools, so we don’t know how many are going to be potentially adversely affected by this bill.  But we do know the importance of athletic participation for those students.”

Chris Hartman of the Fairness Campaign told the committee, “Like all kids, transgender kids simply want to go to school, play with their friends, and feel included.”

He noted the KHSAA already has a policy in place.  “Those policies deserve to be revisited from time to time, to ensure that they are fair and inclusive, and reflect the best science, but we believe that work is best left up to the experts in each sport and medical professionals.”

The bill passed 9-3, with opponents saying this is a solution in search of a problem.  It now heads to the Senate floor.