Prepare To Bid for a Good Cause; Winchester Kiwanis Auction ahead Feb. 26 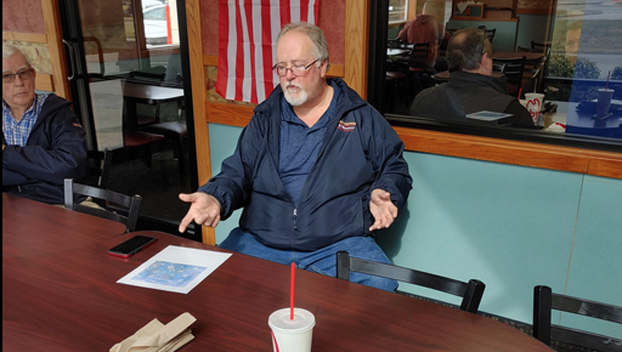 Robert Pritchett, the owner of Bargains on Broadway, talks about the upcoming Winchester Kiwanis' auction to be held Feb. 26 at the popular business spot downtown that serves not only good deals, but great crinkle fries. Pritchett has been very supportive of the Kiwanis club -- donates his staff to run the auction that provides funds for the club's philanthropic projects. (Photo courtesy of Winchester Kiwanis)

“Kiwanis is all about giving back to our community and it is worth noting that our club will celebrate 102 years in existence this Oct,” Kiwanis President Greg Yates said.

Auction will be in-person bidding only starting at 6:30 p.m. Bid on hundreds of items including portable speakers, screwdriver sets, flashlights, dog cages to bicycles; too many things to mention.

“Most of our auction items are Overstock and everything will be new,” Yates said.

Pics of auction items will be posted on our Winchester Kiwanis Club Facebook page.

Other things to bid on deserve a bit of ink too.

“We will have 1 gal of milk per week for a year provided by Winchester Dairy for example,” Yates said. “I know one member is donating 50 lb bags of dog food. We have dinner for 2 from Loma’s, a swag basket from BCTC and 3 framed Paul Sawyer prints.”

One hundred percent of auction’s proceeds go to the Kiwanis annual “Walk with a Child” event that the club has at Walmart in September.

But that’s not all — proceeds help provide school children near and far with backpacks and clothing.

“We work with the Family Resource Centers at the Preschool and the four elementary schools and purchase $80 in clothing for up to about 150 kids,” Yates said. “I know from past years for some of these kids, this is the only new clothing they get at the beginning of school.”

Auction started at least in the early 1950s, if not sooner. Like a super hero’s origin story, the auction’s genesis adds weight to its current super status. Yates said either the auction began from a humble beginning out of the back of a pickup truck in the Kroger Parking lot at the corner of Maple and Broadway — or — it started on the back of a flatbed truck in front of the courthouse.

“Then it became a radio auction until some point in time when it became a radio/tv auction and then in the last few years, we live streamed it over the internet,” Yates said. “In 2019, we changed to the live format as the other options became too costly. Robert Pritchett, the owner of Bargains on Broadway has been very supportive of our club. He donates his staff to run the auction.”