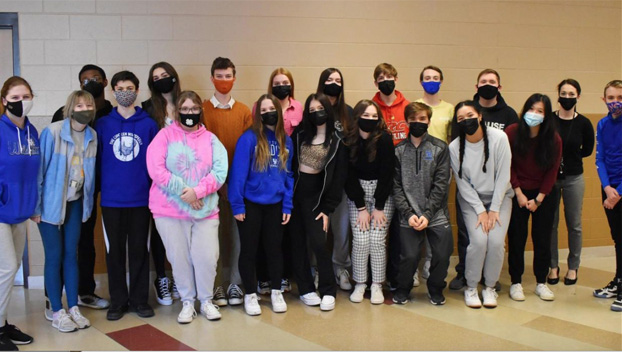 Both George Rogers Clark Mock Trial teams made history by advancing to state for the first time.

The Black Team placed 2nd and the Red Team 8th at the regional tournament this past weekend.

The state tournament will be held at the Fayette County Courthouse March 4-6.

“Many of these students have competed in Mock Trial since 7th grade,” Coach Logan Murphy said, “and their effort has afforded them what will end up being the best year in the program’s four-year history at GRC. We are so proud of them.”

Each year the Kentucky High School Mock Trial Association releases a case in which participants will act as witnesses and attorneys. The team is judged on how well the attorneys present their arguments, along with the character of the witnesses. Team members practice every week to memorize their arguments and witness statements in the case.

“The students have worked all year to gain the proper legal knowledge, professionalism, and knowledge of the case,” Murphy said.

The dedication and hard work also reveals personal skills in these students.

With snow days limiting practice time, the team learned to hone their skills at home.

“We always practice on our own at home with our family members, making sure we are fully prepared and memorized for each competition,” said Sarah James, Black Team member.

Working hard together leads to lasting bonds.
“What may be more important than anything is friendship,” said Izzie Smith, Red Team member.

This bond will push the team forward as they prepare for the state competition. The students will compete in four rounds of competition at state – the defense and prosecution will compete twice. If a team makes it through these rounds, they will compete one last trial for the championship round.

The team has been studying the case since October, so they couldn’t be more excited to compete in state.

When region results were announced, “my teammates and I were so proud,” said James, “that we stopped in our tracks just to soak it in.”